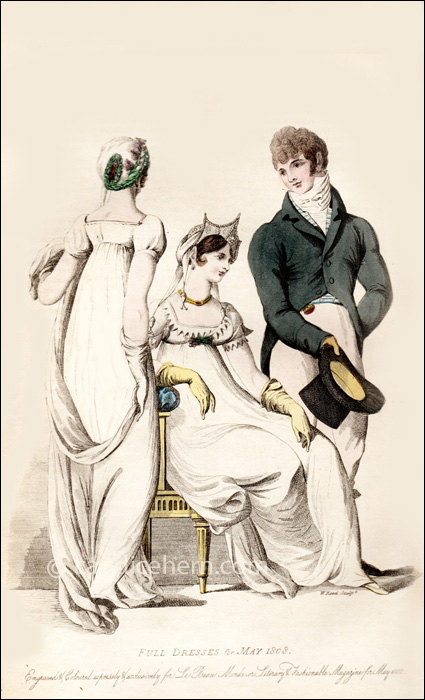 This short-lived magazine typically offered much more detailed descriptions of its fashion prints than its rival publications, as you can see, below. Though it frequently featured gentlemen’s fashion in its prints, the description of their clothes was never as detailed as those for the ladies.

“Fig. No. 1.–The Marmorice cap is made of white crape ornamented with a small wreath of grape vine, and a bunch of grapes on the right side–the cap is left open behind, and falls flat over the left side of the head, finished with a tassel. A plain simple dress of white net over white satin–the body and skirt quite plain and in one [ie a round gown]. The back and bosom of the dress are square, and faced with broad white satin ribbon all round–the sleeves are short and full, and are also set into a band of white satin; the train is short, and trimmed with white satin to correspond with the dress. A rich lace drapery hangs in careless negligence over the arm and gives an additional grace to the elegance of the dress. Shoes white satin. Gloves white kid.

“Fig. No. 2.–The Patmos cap has a diamond front made chiefly of lace, satin, and white pearls–sits close to the end behind, and has three long tassels–one falls on each side of the neck, and the other, extremely long, hangs over the right shoulder. The dress is composed of white crape, and made with a half train, the back is made high and confined round the shoulders so as to avoid the necessity of a tucker. The bosom is made straight, one side wraps across and meets in the centre with a pearl broach, trimmed round the neck with satin vandykes, set on a rich footing of point lace–the sleeves are made rather full on the top, open a little at the bottom, and fastened back with a pearl ornament–and below that is a trimming of lace and satin, and also at the bottom, to correspond with the upper part of the dress. Primrose coloured gloves and shoes.”

Later, in the General Observations of Ladies’ Dress, it is mentioned that the Patmos cap was invented by “the fashionable repository of Roberts, Lees, and Williams, in Russell-street, Covent Garden.”