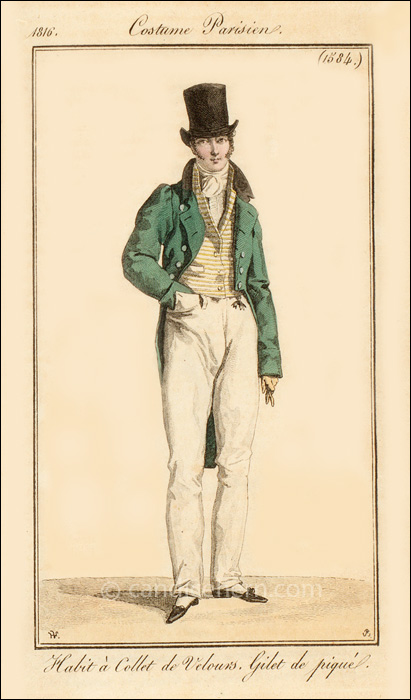 Trousers, which had been introduced more than a decade earlier, became more popular after the end of the Napoleonic Wars, both in France and Britain. The fit was less tight than pantaloons, and must have been more comfortable. At this time, trousers were typically kept neatly in place at the ankle by an elastic strap or stirrup under the instep, though it is difficult to tell if that is the case with these trousers. (That strap is said to have been invented by Beau Brummell.)

The green double-breasted tailcoat, probably wool, has wide cuffs, notched lapels, and a collar of black velvet. The style of sleeve at this time has become slightly more loose-fitting, with shoulders cut very full. Just as with women’s fashion, shoulders in men’s wear will explode within the next decade.

The short single-breasted waistcoat is cut high and straight across the waist, with welt pockets. The striped fabric is a cotton piqué. A fob hangs below the waist.

Beneath the waistcoat is a white shirt with a pleated ruffle down the front, but without the typical stiff high pointed collar worn throughout the period. Over the unseen collar is worn a simply tied neckcloth.