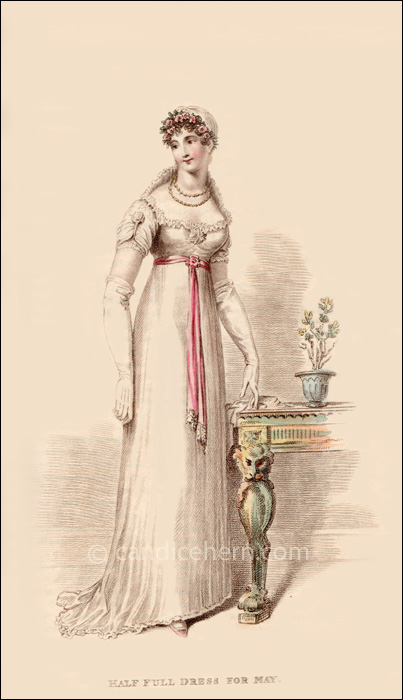 “Half Full Dress for May.”

Half Full Dress is one of the most confusing of the dress categories, at least to the modern eye.  It is a step up from Half Dress but not quite as grand as Full Dress. It’s always difficult to see what makes this dress Half Full and not Full, but readers of the magazine likely knew exactly what it meant.

“No. 2.–HALF DRESS. A frock of plain jaconet muslin, with a demi-train; body of amber and white shot sarsnet, made in the same manner as last month, except that the waist is a little shorter; the sleeve, which is of a jaconet muslin, is very full, and looped up with a floss silk ornament in the shape of a heart; a row of rich narrow lace goes round the bottom of the sleeve, which is something longer than they were worn last month; round the bosom a rich puffing of lace, and a Queen Elizabeth ruff behind, finishes the dress at the neck; but so great is the predilection for displaying the neck and shoulders, that this fashion has been adopted by a few only of our elegantes.

“The cestus à-la-Venus, trimmed at the ends, with a superb knotted silk fringe, gives an elegant finish to the dress. Pearl necklace and ear-rings. White kid slippers, cut very low in front, and trimmed with a plaiting of white ribband instead of rosette; white kid gloves. Head-dress white satin cap ornamented with a half wreath of moss roses scarcely blown, whihc has a most tasteful and elegant effect.”