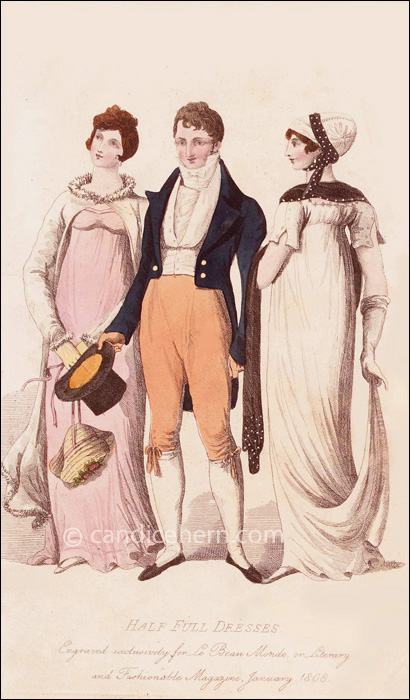 Half Full Dress is one of the most confusing terms of this period. Half Dress is very clearly used for what we might call semi-formal wear, appropriate for private parties, dinner parties, the theater, concerts, or the opera. Full Dress is clearly used for the most formal occasions, eg balls or formal receptions. Apparently Half Full Dress falls somewhere in between. Though confusing and unclear to us, we must assume that the term would have been well understood by the readers of the magazine.

“Fig. No. 1–A rich dress of pale pink net, over a white satin slip; the skirt of the dress is made open behind, in imitation of the train frock, with the body in one, trimmed round the bottom with two rows of pink velvet, to match the colour of the dress; the front of the gown is made tight to the bosom, in circular form, and fulled into a band of pink velvet; long loose sleeves down to the wrist, with stripes of velvet and net, entwined round the arm; a Florentine opera coat of white satin, trimmed all round with a superb fur trimming, of a lemon colour, with the exception of the sides, which is bound with white ribbon velvet, the back is made square and low, setting loosely round the throat, so as to shew nearly the whole of the neck; the front of the coat is sloped off at each side of the bosom, leaving two points, which are fastened in the center of the neck with a cornelian broach. The sleeves are made entirely straight, with no fullness whatever on the top of the shoulder. A Florence hat of straw, with a low dome crown, broad across the top, with a large rim, turned bold up behind and before, trimmed with pale pink velvet, and a bunch of variegated flowers fastened in the center of the crown, and shoes of white satin.

“Fig. No. 3– A round train dress of white crape, over soft white satin; the back of the dress is made to draw square on the top and at the bottom of the waist, with a drawn chemise bosom, trimmed all round with a wreath of silver roses, lapelled sleeves, made short and straight over the shoulders, and worn open on the arms; it is made that it may be occasionally buttoned; a black velvet scarf, richly ornamented all round with white satin roses; and is worked at each end about half a yard in height, placed carelessly over the shoulders; a cap à la Pamela of white satin, confined round the head with a black velvet handkerchief, ornamented with roses to correspond with the scarf; one corner is brought under the chin, tied with one bow, and long ends behind the left ear, so as to fall on the left shoulder. French kid gloves, and shoes of straw colour.

“Fig. No. 2–Evening Dress for Gentlemen consists of blue coats with large flat gilt buttons, and with or without black velvet collars, according to the taste of the wearer; the coats are made double-breasted, and with pocket flaps. White Marseilles quilting waistcoats, single-breasted; tight drab coloured kerseymere breeches, and white silk stockings are the exclusive fashions of the times.”

This article is featured in: Regency Collections ~ Within Collections: Fashion Prints, Half Dress, Gentlemen's Fashion