Fashions of London and Paris, August 1801. 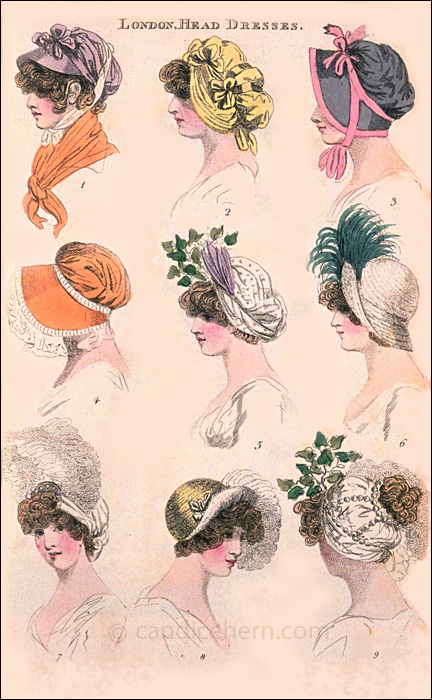 There are two terms in the description of this print that were new to me:  Sociable bonnet and Obi hat. I have been unable to find a definition of the first, but the second is well-documented. An Obi hat is made of straw or chip with a high crown and a narrow brim rolled back in the front. It is named after a character in a pantomime popular at the time.

“No. 1.–A bonnet of lilac silk; the crown full and confined with a handkerchief, which ties under the chin.

“No. 2.–A cap of yellow crape, the crown long and full, and confined in several places with bands of crape, ornamented with bows of the same.

“No. 3.–A bonnet of slate-coloured silk, trimmed and tied under the chin with pink ribband.

“No. 4.– Sociable bonnet of buff muslin, trimmed round the front with white lace.

“No. 5.–Turban of spangled muslin, ornamented with flowers and a lilac feather.

“No. 6.–Obi hat of white chip, with a green feather in front.

“No. 7.–A dress cap of muslin ornamented with beads, and white ostrich feathers.

“No. 8.–An embroidered straw hat turned up in the front, a large white feather falling over the left side.

“No. 9.–A dress cap of muslin and lace, made open on the top of the head, to shew the hair, ornamented with beads, and a flower in front.”