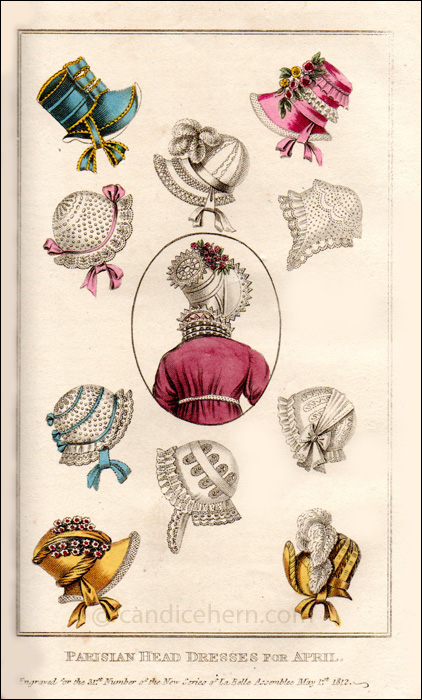 The central half-figure is copied from a “Costume Parisien” print in the French magazine Journal des Dames et des Modes, December 5, 1811.  The  bonnets appear to be copied from various prints in the same magazine. This sort of mash-up of French prints is typically found in the German edition of the magazine. So, it would appear that La Belle Assemblée, which usually “borrows” prints from the Paris edition, based this print on the Frankfurt edition.

“HALF-FIGURE IN A WALKING DRESS AND VARIOUS PARISIAN HEAD DRESSES.
Fig. Kit-Cat–A ruby pelisse of sarsnet, with a collar applique of white satin; the pelisse confined by a silver belt; sempstress bonnet of white satin, edged with vandyke lace, and ornamented in front with a full bunch of red ranunculas; old English ruff, edged with fine narrow lace of a vandyke pattern.

Head-dresses.–Fig. 1. Imperial bonnet of Maria Louisa blue, ornamented with straw-colour French trimming; three bows of ribband, the same colour as the bonnet, in front of the crown, which is high and spiral, the bows edged with the straw-coloured trimming; the bonnet lined with white, and turned up in front.–Fig.2. The Norman bonnet of rose-coloured satin, trimmed round the edge with white puckered crape, the crown ornamented with alternate quiltings of white crape and rose-coloured ribband.–Fig. 3. The Hyde Park bonnet of white satin, richly ornamented with white fancy trimming, a plume of four white ostrich feathers falling over the front.–Fig. 4. The Lejeune cap of fine spotted muslin, trimmed next the face with a very broad French lace, and ornamented with rose-coloured ribband.–Fig. 5. The coiffeure à l’indisposition, a mob of fine spotted muslin, with double border of clear book muslin, edged with narrow lace, a broad lace ornament falling from the crown towards the face.–Fig. 6. The peasant’s cap of fine lace and muslin intermixed, double border of fine French lace, and three rows of Maria Louisa blue ribband, with bows behind of the same.–Fig. 7 and 8. Dinner caps of white satin and lace intermingled, made in the toque, or French college style.–Fig. 9. Close bonnet for morning visits, or amber satin lined with white satin powdered with small spots, which by being turned up, forms an edge all round the bonnet; two full bunches of white auriculas are placed in front, separated by a rich fold of satin the colour of the bonnet.–Fig. 10. Dress bonnet of the colour of feuille morte, trimmed round the edge with striped ribband of the the same colour, the crown ornamented fancifully with the same material; an immense plume of white gossamer feathers falling over the front, which is turned quite up, finishes the head dress.”