Fashions of London and Paris, July 1809.

This is one of my favorite years for hats. I think of it as a year of restraint. It’s almost restful after 1807,  which had produced enormous tunnel-like pokes. 1808 reeled in some of the craziness of the previous year. By 1809 the crowns have become rounder and more full, and the brims quite small. 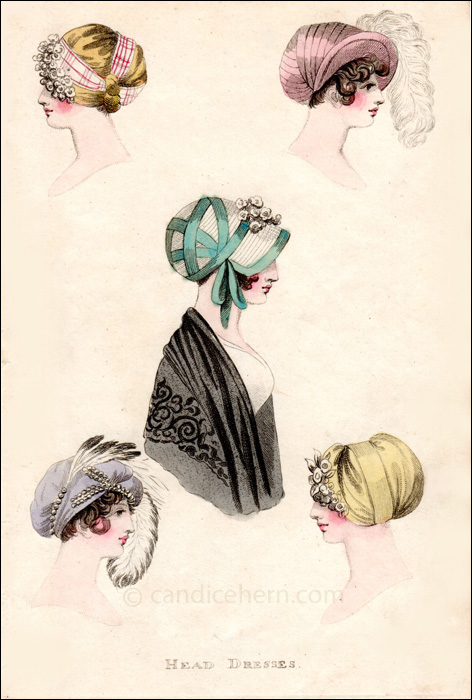 Feathers are not high, if standing up, and often droop down over the face. Ribbons and flowers and other adornments are also made close to the head. I think every one of the hats in this print is quite tasteful.

“Fig. 1.–A cap of yellow crape and figured ribbon; a bunch of flowers in front.

“Fig. 2.–A hat of striped satin, ornamented with an ostrich feather.

“Fig. 3.–A bonnet of white chip, trimmed with blue ribbon; a bunch of flowers in front. A black lace shawl.

“Fig. 4.–A turban hat of crape, ornamented with beads and feathers.

“Fig. 5.–A bonnet of yellow silk, with a bunch of flowers in front.”

This article is featured in: Regency Collections ~ Within Collections: Hats