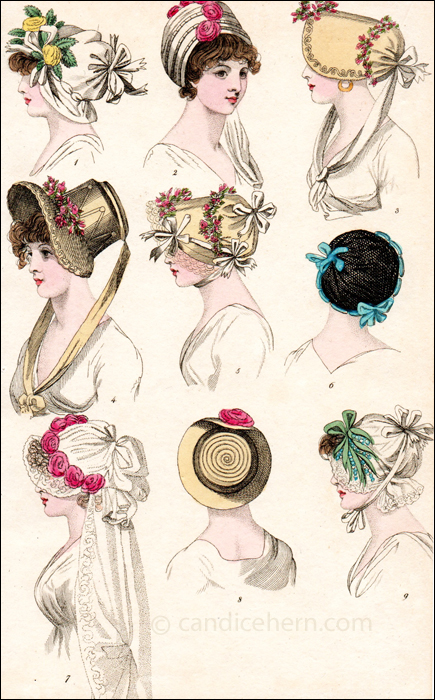 Hats were the only fashion accessory to be given their own prints in the ladies’ magazines, as they were such an integral element of a  woman’s dress.  Prints like this one show the wide variety of hat styles available to the fashionable woman.  Even though numbers 1, 3, 5, 7, and 9 show a variation of a capote, each one is quite different.

Note also the hoop earring shown in number 3. Despite how modern they look, gold hoop earrings were popular throughout the extended Regency period.

“No. 1. An undress Cap of white crape, trimmed with white ribband and yellow roses.

“No. 2. A Turban of white crape, ornamented with three bands of bugles, and a wreath of red roses from the front across the crown.

“No. 3 The Venetian Bonnet, made of straw and trimmed with straw flowers, the strings fastened with a bow behind and tied loose on the bosom.

“No. 4. The Neopolitan Bonnet, made of Leghorn trimmed with straw flowers. Strings of the same colour as the bonnet, fastened to the crown and tied loosely at the bosom.

“No. 5. A Bonnet of straw with an open edge, trimmed with white ribband, and with wreaths of flowers.

“No. 6. A Cap made of black crape or gauze, trimmed with a blue wreath and bows.

“No. 7. Bonnet à L’Atalante, made of point lace, trimmed with a wreath of red roses.

“No. 8. A Straw Hat with horizontal rim, turned up in front, and one red rose.

“No. 9. A Cap of point lace, trimmed with white ribband and with lilies of the valley.”