Fashions of London and Paris, June 1803. 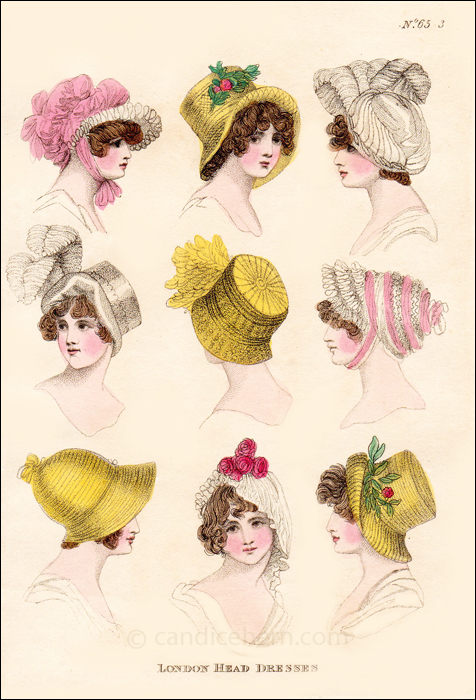 Hats are the only accessory that get their own fashion plates, which indicates how important they were to a lady’s wardrobe. If you browse through almost any of the other groups of fashion prints on this site, you will see that the bonnet typically gets as much space in the description as the dress. Hats were purchased at millinery shops, but could easily be modified and updated at home with new ribbons, lace, flowers, feathers, and other ornaments. Hence the frequent publication of fashion plates of hats, especially in the less expensive publications, like this one, which would have provided the middle class lady with ideas on updating her bonnets and caps.

“No. 1. A bonnet of pink silk with a white lace front, a full double crown finished on the top with a bow and tied under the chin with pink ribbon.
“No. 2. A ribbon and straw hat, the ribbon in diamonds, and the straw in beads, turned up in front and ornamented with a flower.
“No. 3. A turban of white satin and crape ornamented with a plume of white ostrich feathers.
“No. 4. A hat of white satin trimmed all over with beads, with two ostrich feathers.
“No. 5. A hat of yellow silk covered with black lace, a yellow ostrich feather in front.
“No. 6. A cap of pink silk and net tied under the chin with pink ribbon, and covered the left side of the face.
“No. 7. A morning bonnet of straw of chip.
“No. 8. A cap of white lace with a bunch of roses in front.
“No. 9. A straw hat with a double front, turned up before, and ornamented with a flower.”

The magazine goes on to discuss General Observations on fashion, including these comments on hats:

“Lustre straws, either all lustre or mixed with chip or Leghorn, chiefly of the small Obi shape, are among the spring novelties. The other hats the most general are the simple gypsy, called the merry gypsy, of plain white chip, trimmed with puffings of white or blue ribbon, and tied under the chin; also the conversation hat, covering one ear, made of sarsnet or muslin of various colours, and ornamented with a wreath of flowers.”