Fashions of London and Paris, September 1803. 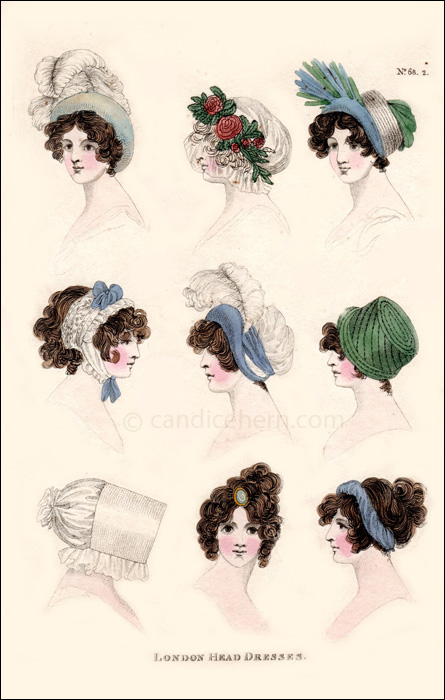 Three of the hats are said to be trimmed or lined in lilac, though in every version of this print I’ve seen, the colorists used blue. Blue is also used in the lower right bandeau, which is said to be silver. As this was an inexpensive publication, it is possible that the colorists had limited resources, or had not been trained to mix blue and red and white to make something closer to lilac.

It is interesting that the center left hat is called a mob cap, a style that usually covers the whole head. Here, it looks like half a mob cap, leaving the back open.

“No. 1.–Turban of blue crape, ornamented with white ostrich feathers.

“No. 2.–Cap of white lace, with a deep lace border, ornamented with a wreath of roses.

“No. 3.–Hat of white chip, the front turned up and lined with lilac; the hat trimmed with green, and ornamented with a green and lilac feather.

“No. 4.–A mob cap of white lace, tied under the chin, and trimmed with lilac.

“No. 5.–Hat of white silk, with full crown, the front turned up and lined with lilac; ostrich feather in front.

“No. 7.–A close bonnet of white muslin, the sides and top of the crown trimmed with white lace.

“No. 8–The hair dressed in the most fashionable style, and ornamented with a medallion in front.