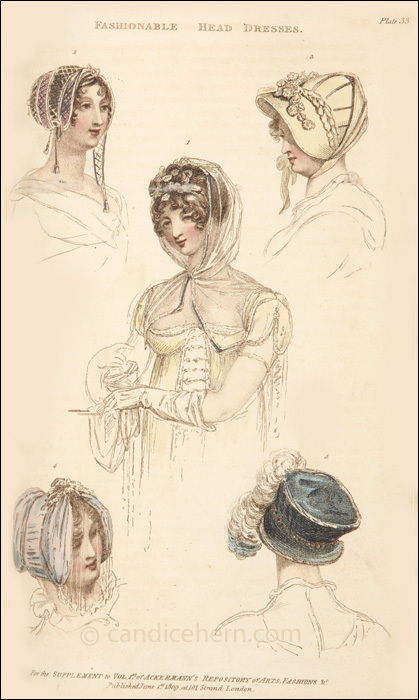 This print appeared in the Supplement for Volume I of the Repository of Arts (January – June 1809). It is not clear whether these supplements were published as separate issues of the magazine, or published along with the June issue.

The text accompanying the print is much more brief than those in the monthly issues. Or perhaps, as this was the first ever print of hats produced for this magazine, they simply believed short descriptions of head dresses was sufficient for their readers.

Between the first issue of the Repository of Arts in January 1809 through 1820, only 5 prints of hats were published. Most, like this one, were original prints. Beginning in 1817, they began to do as their competitors did: “borrow” prints from the French publication Journal des Dames et des Modes.

“No. 1. [center] Wimple, or hood of transparent gauze bordered with silver.

“No. 4. [lower right] Dress hat of cerulean blue, bound with pearls and trimmed with silver; white feathers tipped with blue.”