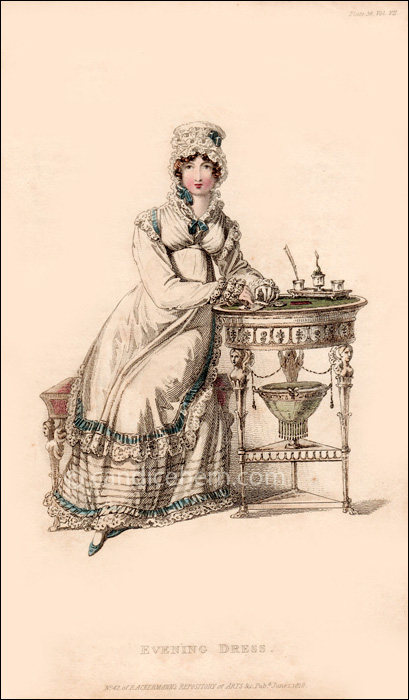 There is so much interesting period detail in this print, some of which may be difficult to see online. First is the beautiful French worktable. Generally Ackermann features contemporary British furniture (what we now call Regency style), but this work table is very specifically Louis XVI style. The items on top of the table are of particular interest. There is the silver writing set, a stick of red sealing wax, and the lady is in the process of sealing a letter with a seal that appears to be attached to a watch chain. Lovely details!

“MORNING DRESS. A round dress of thick jaconet muslin: the bottom of the skirt is richly worked in points; they are surmounted by a broad easing; which is drawn by blue ribbon; several rows of cord are placed above this easing. Chemisette body; the waist is longer than usual: the collar is of a new description; it is composed of muslin laid on full over ribbon, and edged all round with rich work. Long sleeve, tastefully ornamented at the wrist, to correspond.

“The apron worn with this dress is composed of the same material; it is rather more than a three-quarter length, and is trimmed round with rich work. A brace is attached to the back part of this apron, which forms at once an epaulette and a low back to the dress: it is advantageous to the shape, and has a very tasteful effect; it is composed entirely of rich work. Head-dress, a cornette, or rather we should say a half cornette, composed of white lace: it is of a moderate height, and has very small ears, which do not meet under the chin, where it is tied with blue ribbon; it is ornamented only with a simple bow of ribbon to correspond, which is placed on one side of the caul. Blue kid shoes.”

After the description of the second print is the following note:

“We are indebted to Miss Pierpoint of No. 9, Henrietta-street, Covent-Garden, for both our dresses this month.”