Ackermann’s Repository of Arts, May 1812. 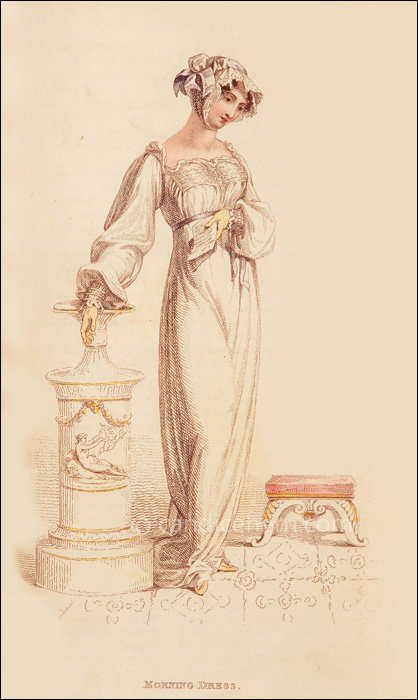 As this is named a “Domestic or Morning Costume,” it would be classified as an Indoor Morning Dress, ie one worn at home and not for outdoors or visiting. As with most Indoor Morning Dresses, the dress is white and somewhat loose fitting for comfort. Even at home a married woman or older spinster would wear a cap of some kind. Variations of mob caps were popular throughout the period for Morning Dress.

“DOMESTIC OR MORNING COSTUME. A French frock of fine plain muslin, with demi-train, and long full bishops’ sleeves. Waggoners’ cuffs, with gaged front and shoulders to correspond. Tucker of double-rolled muslin, which also finishes the cuffs round the hands. A Parisian mob cap of fine lace, confined round te head, and terminating on one side with a celestial blue or silver grey ribbon. Sash of the same, tied in small bows and ends in front. Hair in waved curls, divided in the center of the forehead. Spanish slippers of lemon-coloured kid, and gloves of the same material. The peculiar taste and elegant simplicity of these habiliments are further specimens of the graceful invention of the celebrated Mrs. Gill, of Cork-street, Burlington-gardens, from whom we have obtained them.”

Mrs. Gill had been trained by the famous modiste Madame Lanchester, who had acted as a sort of fashion editor in the first year or two of this magazine. Perhaps she was still involved in that capacity, and used her influence to promote her protégé.