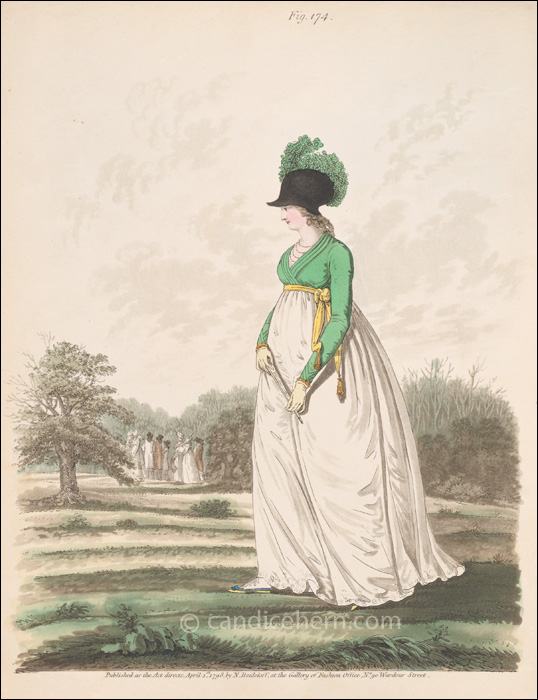 The skirt here is slightly fuller than is typical for 1798, when the silhouette had begun to narrow considerably. The term corset at this time referred to the bodice, so the spencer-corset named here might indicate that the spencer jacket is more of a permanent bodice, and not necessarily removeable as an item of outer wear. A Minerva hat, named for the goddess of war, was any helmet-shaped hat with a feather.

The gold jewelry is painted in bright gold metallic paint, difficult to see online, but quite striking in person.

The group of walkers in the background is an unusual addition, not often seen in prints from this publication.

“The toupee cut short, and combed straight upon the forehead; the hind hair in ringlets. Black Minerva bonnet; one green curled feather crossing the crown, and another placed on the right side near the front. Petticoat of white muslin, with an embroidered border. Spencer-corset of green satin, with plaitings in the front, and plaitings with a gold trimming at the wrists. Yellow sash, with gold tassels, tied on the left side. Triangular gold ear-rings. Four small gold chains round the neck. Yellow shoes, trimmed with blue fringe.”