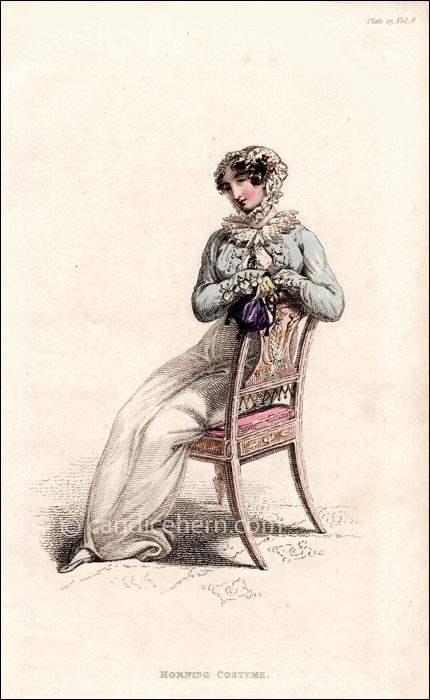 Remove the spencer and the purse (“ridicule”) and this would look like an indoor morning dress. But once  you’ve grabbed the spencer, the the purse, and the gloves, you are likely heading outdoors, so it becomes a morning walking dress. But the description allows that it might also be worn as a carriage dress. When she does go outdoors, she would have worn a bonnet on top of the cap.

All this goes to show that a single dress could be adapted for many uses, meaning there was no actual need to have a separate morning dress, a walking dress, and a carriage dress, as the magazines, and apparently dress-makers, liked to dictate. Just accessorize it differently for different occasions, and you have multiple looks.

“AUTUMNAL CARRIAGE OR MORNING COSTUME. A plain jaconet muslin robe, formed high in the neck, with double frills of deep vandyke lace. A grey satin spencer, ornamented with silver cord and buttons en militaire, and confined at the throat with a correspondent cord nd tassels; the spencer formed without a collar, and the double frill of the morning robe falling over. A quartered foundling cap of lace, confined with a full band of the same under the chin, and ornamented on one side with an autumnal flower. Shoes of grey kid; gloves lemon colour; and ridicule of purple velvet.”