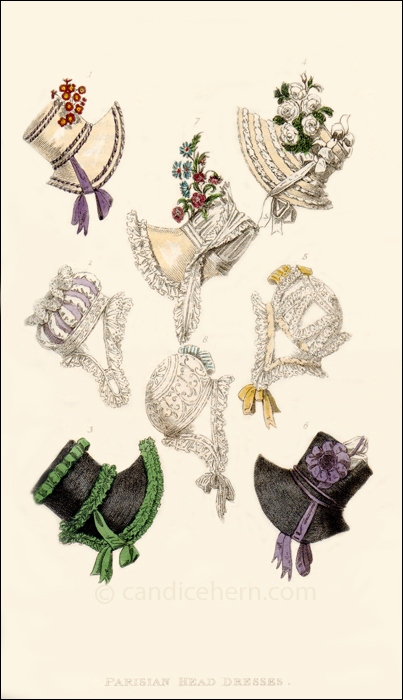 By 1817, bonnet brims had gotten huge, and would get even more so in the next few years. The soaring crowns that began in 1814 have moderated a bit by this time. Caps, generally worn at home as a part of undress or morning attire, or under a bonnet in outdoor attire, changed less dramatically over the years, simply gaining fussier trimmings, as did all fashion, in the latter years of the Regency

“No. 1. A plain straw bonnet, lined and trimmed with lilac. The crown of a round shape, and a moderate height; the front is large and ornamented with lilac ribbon : the crown is decorated at the top and bottom to correspond. It is finished by a bunch of auriculas and lilac strings.

“No. 2. A morning cornette, composed of worked muslin; the lower part a mob, the crown round, made very full and divided into compartments by drawings. The top of the crown is edged with lace; the border corresponds. No ornament.

“No. 4. A fancy straw bonnet of a peculiarly elegant and novel shape; the front very large, but the crown of a moderate height. It is lined and trimmed with white, and ornamented with a profusion of white roses.

“No. 5. A cornette, composed of tulle, the crown round and made very high; the lower part a mob, cut in a different manner than any we have seen; a row of straw-coloured ribbon is run in next to the border; strings and bow to correspond.

“No. 6. A remarkably neat plain black straw morning bonnet, trimmed and lined with purple, and ornamented with a single China aster.

“No. 7. A very elegant promenade bonnet; the front composed of Leghorn, trimmed with a puffing of tulle; the corn, of white satin, is made very full and rather high. the fullness is confined at top by a white silk half-handkerchief, edged with tulle, which ties it under the chin. It is ornamented with a bunch of Provence roses and fancy flowers. 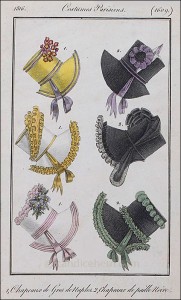 “No. 8. A morning cornette, the upper part composed of worked and the lower of plain muslin; the crown oval, with a full puffing of muslin up the middle. A lace border and white satin strings.”

The hats in this print were copied from several Costume Parisien prints from the French publication Journal des Dames et des Mode. In the print shown here, from November 30, 1816, we can see three of the bonnets used in the Ackermann print. Click on this image to see a larger version.