Small compartmentalized boxes appeared in the mid-18th century in France for holding face patches, those tiny bits of velvet or moleskin worn on the face as beauty marks. The French called those artificial beauty marks mouches, meaning “flies” as they were thought to resemble black flies landing on pale skin. The boxes were called boîtes à mouche or patch boxes. Some of those small boxes began to include other things, like rouge or powder and tiny brushes or powder puffs.

The English had their own tradition of patch boxes: tiny boxes of all shapes and in all sorts of materials to hold face patches, sometimes with a mirror in the lid.  Apparently the English liked the French boîtes à mouche, but only those that included rouge, so their versions eliminated the patches altogether and focused on the cosmetics. Dealers and collectors still refer to these English boxes as boîtes à mouche even though they were not used for patches. I like to think of them as portable cosmetic cases, small enough to carry in the pockets that were worn beneath dresses. 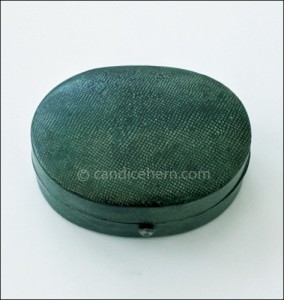 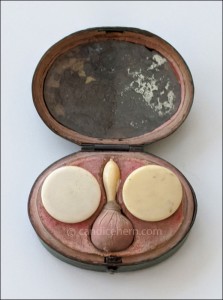 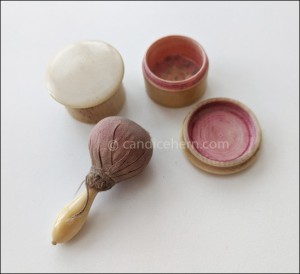 The two cases from my collection shown here (click on the images to see larger versions) are both made of shagreen, which is the skin of the shark, ray fish, or dog fish, ground flat to create a granulated pattern. The skin is then dyed various colors, most often green, as here. Both cases are English, approximately 2 ½” wide, and date from the 1770s or 1780s.

The case shown above has a plain exterior with a sterling button opener. Inside the lid are the remains of a mirror. The case is lined in pink velvet with recessed compartments to hold two tiny ivory jars with screw-on lids for rouge. (Remnants of rouge still remain inside the jars.) Each jar is approximately ¾” across. The central recessed compartment holds a tiny rouge applicator made of a pink silk ball tied onto an ivory handle. The applicator is approximately 1 ½”  long. 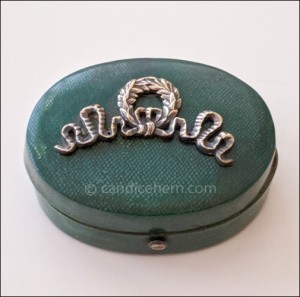 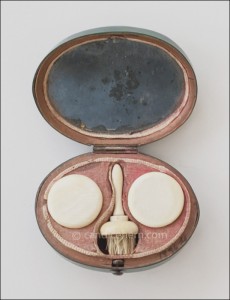 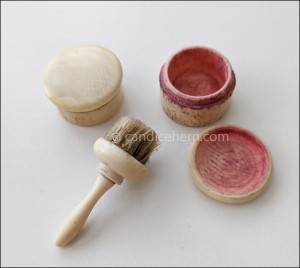 The case above has a sterling ornament attached to the lid, with a sterling button opener. Inside the lid is a mirror, more complete than the one above, though heavily spotted. The case is lined with pink velvet, with pink cord outlining the mirror, the case, and its compartments. The two ivory rouge cases are identical to the ones in the previous case, with screw-on lids. The center compartment holds a tiny rouge brush made of ivory. The sizes of the items are the same as in the previous case, ie delightfully tiny.

These two cases are much simpler than those you can find in museums, such as this one from the Metropolitan Museum of Art. The museum examples are generally made of expensive materials and are more ornate in their decoration, probably used by ladies of the noble class. The examples shown here, so much more modest, were likely used by somewhat less affluent ladies.

This article is featured in: Regency Collections ~ Within Collections: Dressing Table Items