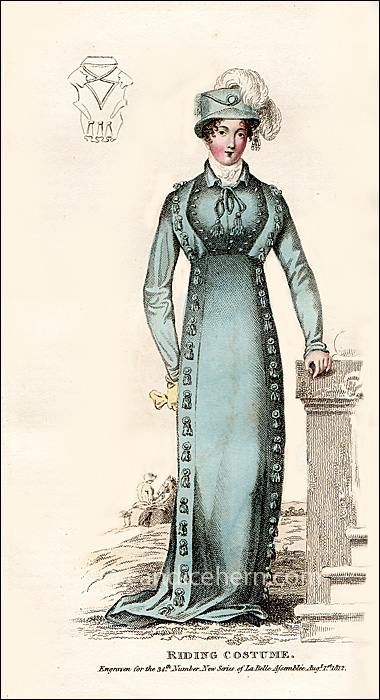 This print is especially interesting as it includes a small drawing of the back of the habit jacket, which would have been most useful for the dressmaker. It’s also interesting that the magazine text describes at length the type of parasol that would have been used with this costume, and yet there is none shown in the print. In fact, parasols are almost never shown with riding habits as they could not have been carried when riding.

“Made of ladies habit cloth, of Maria Louisa blue, trimmed down each side of the front with Spanish buttons, the waist rather long, with three small buttons on the hips; a short jacket, full behind, the front habit fashion, with small buttons up to the neck, and a row of small buttons on each side of the breast; a lappel thrown back from the shoulder, and trimmed with Spanish buttons, has a most elegant effect, and gives a graceful finish to the dress. The collar is made about half a quarter in depth, and fashioned negligently at the throat with a large cord and tassel; it opens sufficiently to display the shirt, which is of lace in general, but this article admits of considerable variation; some of our elegantes wear a collar of lace to fall over, others have the shirt edged round the neck with a rich lace frill, and not a few, in despite of the heat of the weather, envelope their necks in a large cravat of India muslin. A small woodland hat, whose colour corresponds with the dress, with two white ostrich feathers fastened behind, and falling carelessly over the left side. A cord and tassel is brought round the hat, and fastened on top of the crown on the right side. Buff gloves and half boots either of buff jean or leather. Parasol to correspond with the dress, the top in the form of a dome; many are worn plain, but the most elegant have an embroidery in white silk around the edge; and we have observed in a few instances a buff embroidery, which has a pretty effect, but this fashion is not general. — This tasteful Riding-dress is now the elegant costume of the fashionable Equestrians in the Island of Batavia; the pattern of which has been received by Mrs. Schnabner from her son, now resident in that island, who considered it as being worthy of the adoption of the British fair in the Metropolis of Fashion.”