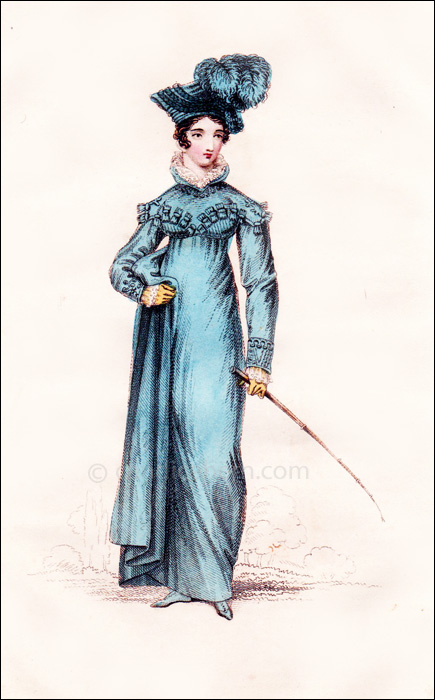 Mrs. Bell was related in some way to the publisher of La Belle Assemblée, possibly his daughter-in-law. Throughout the first two decades of the 19th century, her designs dominated the pages of La Belle Assemblée, and it is likely that much, if not all, of the fashion commentary with written by Mrs. Bell, as well, with its often effusive praise of her own designs.

This print is described in the magazine as follows (and, interestingly enough, it is one of the shortest descriptions of a fashion print I’ve ever seen in this magazine):

“Habit of fine Merino cloth, or the Florentia blue colour, finished about the bust and cuffs with Peruvian trimmings. Blue military cap, ornamented with plumes of feathers and rich silk cordons. Ruff of fine Mechlin lace. The hair arranged in the Grecian style. Blue kid half-boots, and lemon-coloured gloves.”