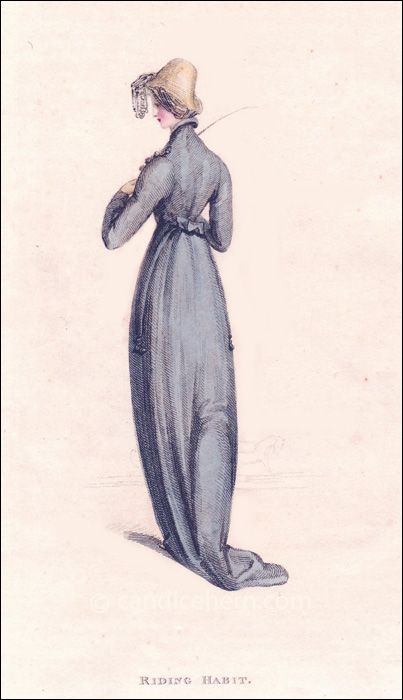 “Of fine Georgian cloth; colour a pale lead or olive tinge; ornamented with frogs à la militaire in front, and finished at the pocket-holes to correspond. Beehive hat of fine moss or cottage straw; white lace curtain veil, twisted occasionally round the rim of the hat; jean or kid half-boots, the colour of the habit, trimmed with fur; gloves of straw-coloured kid or York tan. Pelerines of fur are becoming and [sic] seasonable appendage to the equestrian habit, furnished us by Mrs. Schabner, of Tavistock-street, Covent Garden.”

This is one of the earliest examples I have found of a riding habit designed by a woman. From this year forward, more dressmakers took on the task of designing habits, which had until this time always been designed by men.