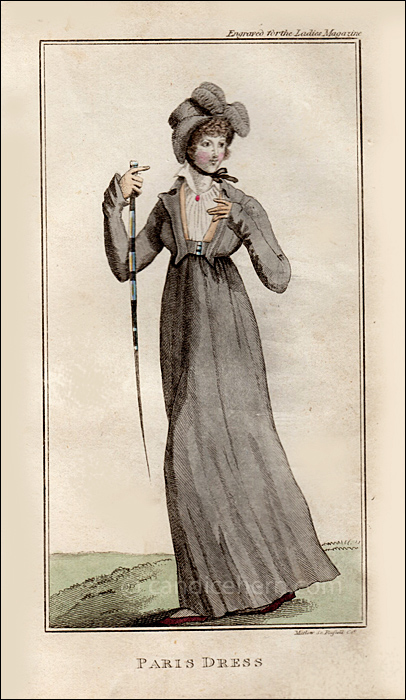 During the first few years of the new century, this magazine, which had been in publication since 1770, began to “borrow” prints from the French magazine Journal des Dames et des Modes. The only hint given that it was a “borrowed” print is that each of the prints based on a French print was given the title “Paris Dress.”

They were almost exact copies, with occasional alterations of small details or, more often, of the face. This one is a very close copy, with the only obvious changes being the color of the hat (which matches the habit here, and is a lighter shade of gray in the French print), and the brighter buttons on the waistline.

A frustrating thing about The Lady’s Magazine is that despite having decent fashion reports and commentary, the prints, at least in these early years of the century, were never described as they are in other publications.  The original French print gives little more help, providing only a short description below the print. In this case, the French print tells us that the habit is of cashmere, and the hat is called a “Chapeau de Castor.”

In the commentary in this issue of The Lady’s Magazine, the only possible reference to the print is the following note regarding Parisian fashions: “Beaver hats with riding dress are much worn.” 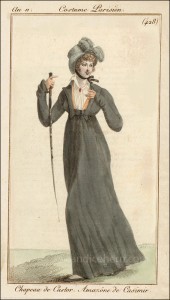 You can see the original French print below, It was published in the November 21, 1802  issue of Journal des Dames et des Modes. The brief description beneath the print reads: Chapeau de Castor. Amazone de Casimir. Click on the print to see a larger version.

This habit, in both prints, has no train, which is unusual as the train was used to drape over the legs when riding side saddle. Habits were composed of a skirt with attached bodice, and a jacket. A habit shirt, or a short trucker, would have been worn beneath the bodice. In this print, you can see the waistline of the skirt and what appear to be the edges of the attached bodice, which was typically sleeveless. The habit bodice is a sort of undergarment, so it is unusual to see it in a fashion print. But this is based on a French print, after all, where more liberties were often taken.