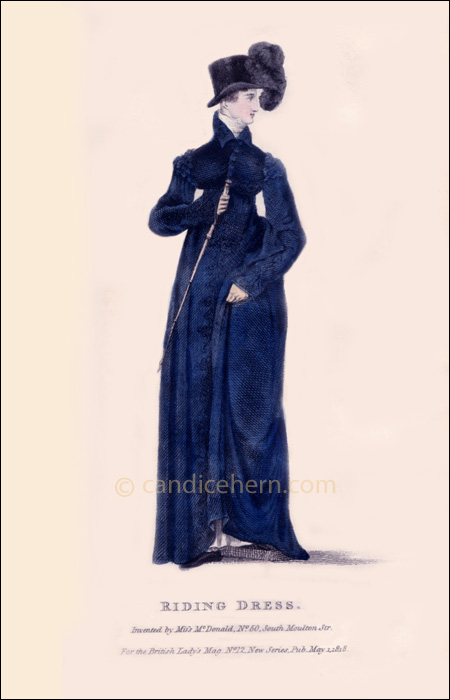 This short-lived magazine includes nice hand-colored fashion prints, but not of the quality seen in La Belle Assemblée or Ackermann’s Repository, and many of the prints from those magazines are copied, without attribution, in this publication. (Copyright laws were loosey-goosey, or non-existent, at this time.) In this print, the heavily applied dark blue paint obscures some of the detail described in the text, especially the embroidery and braiding.

“Homberg habit of fine Royal blue cloth; the skirt, which is very wide and long, is superbly embroidered up the front with braid, in a new and elegant manner; the body is made tight to the shape, and without seams, meets and buttons in front; the waist short and terminates with a small jacket, which is richly braided; the sleeve of a moderate width, braided at the cuff; wing epaulets, beautifully embroidered with braid and tassels; riding vest, composed of fine India dimity, made close in front to support the figure, to which is attached the newly invented Athenian brace which produces that fall of the shoulders and elegant form of the back so much admired, and prevents that warp in the figure which riding often produces; cravat of fine India muslin, and an embroidered collar. Hat of plush, with a plume of intermingled black and blue feathers. Blue boots, and beaver gloves.

“For the above dresses we beg to acknowledge our obligations to Miss Macdonald, inventress of the Ionian Cork Hats, 50, South Moulton Street, Bond Street, to whose taste and ingenuity we have frequently been indebted.”

In the General Observations on Fashionable Dress the Homberg Habit is mentioned again: “We observed it on a lady of rank, and were particularly struck with its beauty.”