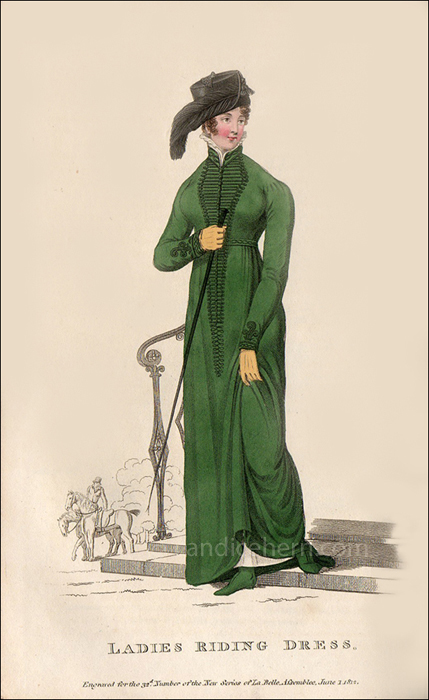 Though this habit looks like a single garment, it was almost certainly two pieces — jacket and skirt — as were all habits of this time. The embroidered design beginning at the collar and continuing below the waist visually suggests a single pelisse-type garment, but instead would have been  two separate pieces made to be worn together. This habit was made by a Mr. Clark, whose name often turns up in prints or advertisements for habits.

Male tailors had historically made habits for women long after female dressmakers became the leading designers and creators of women’s fashion. But during this decade, 1810-1820, we begin to see that the majority of habits featured in magazines were designed by women, usurping that last bastion of male influence. Mr. Clark would have been among the few male tailors still providing habits for women.

Love the background figures of a mounted groom and a horse with what looks to be a side saddle, perhaps awaiting this lovely equestrienne.

The prints is described in the magazine as follows:

“A habit of bright green ornamented down the front and embroidered at the cuffs à la militaire with black. Small riding hat of black beaver fancifully adorned with gold cordon and tassels, with a long ostrich feather of green in the front; or a green hat with black tassels and black feather. [All painted black in the print.] Black half boots, laced and fringed with green. [Boots painted green in the print.] York tan gloves. When this dress is worn as a curricle or walking costume, it is made as a pelisse without the riding jacket, and confined round the waist by a fancy belt of black and green. This habit was made by Mr. S. Clark, 37 Golden Square.”