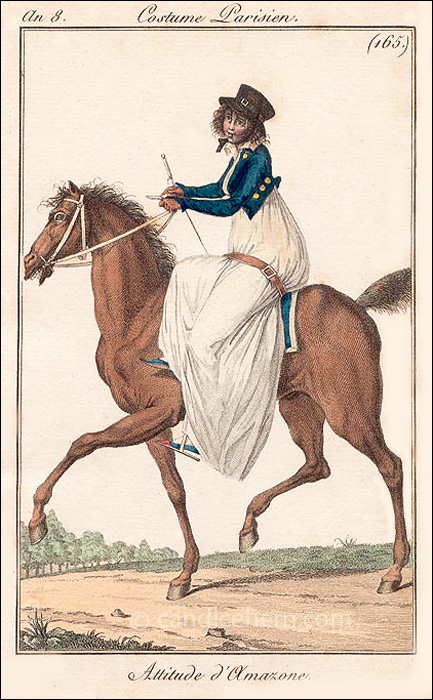 This riding habit is interesting in that it appears to consist of a dress and a spencer, and not the more typical matching skirt and jacket of blue, green, or gray.

Other things to note are the brass buttons along the edge of the spencer, which is cut very high in the back in the style of this early period; the blouse or bodice underneath that has an open collar rather than the more typical tight high-necked collar with a ruff or masculine style neckcloth; the black hat in a modified top-hat style with a buckle in front; and the slippers (stylishly blue with red toes) rather than half-boots, riding boots, or some other sturdy shoe.

Also of note is the belt that holds the rider on the unseen side-saddle. A similar belt can be seen in this riding habit from 1807 and several others. I have not been able to determine if the purpose of the belt is to hold the rider on the horse, or to protect the long skirts of the habit from flapping in the wind and revealing too much.

The date at the top of the print says An 8. This indicates Year 8 of the Republican calendar, which was used from 1793 to 1805. The Republican calendar year began the day the autumnal equinox occurred in Paris (late September), and had twelve months of 30 days each. The five or six extra days needed to approximate the solar year were placed after the months at the end of each year. A very confusing calendar system, as the first day of the year did not fall on the same day every year, and there were all those pesky extra days hanging around at the end of the year. Don’t even ask about leap years, which became a real problem. Napoleon agreed that this was an inefficient system, and restored the Gregorian calendar on January 1, 1806.

This print was published in the issue of the magazine dated 10 Brumaire Year 8, ie the 10th day of the month Brumaire in the Year 8, which translates to November 1, 1799.