Fashions of London and Paris, December 1798. 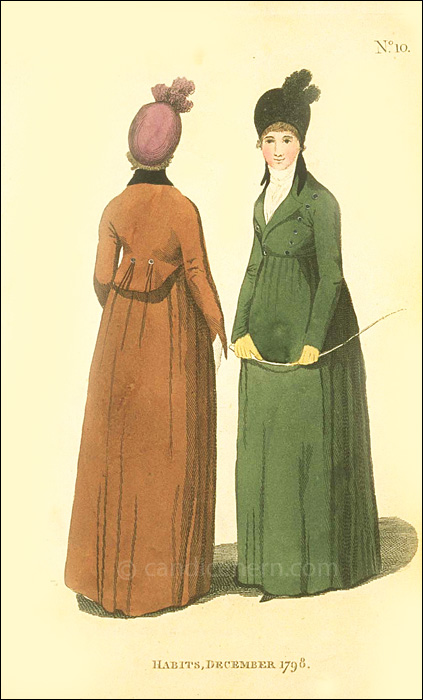 This print likely shows the same habit, in different colors, from front and back. Each has a black velvet collar. The back view shows a short pleated peplum, and the front shows a double-breasted jacket. Note the buttons that run all the way up to the shoulders, in imitation of men’s jackets of the period. Another homage to male fashion is the use of a cravat instead of a fichu or chemisette.

The hats appear to be brimless helmet style caps with small plumes.

One aspect that is curiously missing from these habits is the typical train, which would have covered the legs when riding side saddle.

The print is described, only briefly,  in the magazine as follows:

“Riding habits of the most fashionable colours, corbeau or olive. The hats of velvet, or beaver and of all colours with small plumes. Shirts and cravats worn in place of handerkerchiefs.”