Vinaigrettes were small containers used during the 18th and 19th centuries for holding various aromatic substances, usually dissolved in vinegar. A tiny piece of sponge, soaked in the liquid, was contained beneath a grill or perforated cover. The aromatic vinegar acted as a sort of smelling salts. You can read more about vinaigrettes from my collection here.

Vinaigrettes were so popular that they made their way into other objects. They might be found embedded in the lid of a scent bottle, the handle of  quizzing glass, the reverse side of a locket or brooch, or even embedded in a fan guard. Any item that would have been kept close to the user, either worn as jewelry or as part of a chatelaine, or carried in a pocket or reticule, could have been adapted to include a vinaigrette

Some of the most popular items to include vinaigrettes were pieces of jewelry. This ring from my collection is a good example. It is English and dates c1810. (Click on the images to see larger versions.) 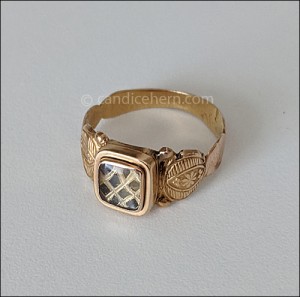 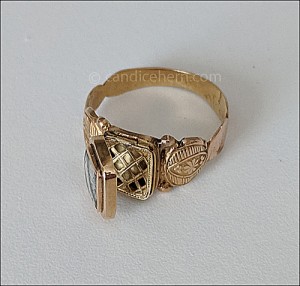 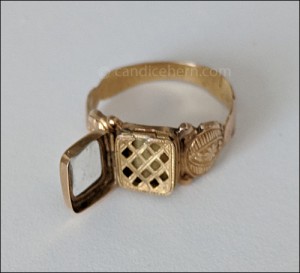 The ring is gold with chased and engraved decoration on the sides. The center of the ring holds a tiny vinaigrette, just over ¼” across. The hinged cover is made of rock crystal. Visible beneath the cover is the grill, made in a simple lattice pattern. Under the grill is a teeny tiny sponge. I can’t swear that it is a 200-year-old sponge, but it was in the ring when I bought it.

If one was feeling faint or queasy, it would have been easy enough to flip open the tiny cover of the ring vinaigrette and hold it up to the nose to inhale the aromatic fumes — much easier and quicker than digging through a reticule or pocket to find a vinaigrette box.

The vinaigrette ring follows the tradition of the poison ring, which became popular in the 16th century. The poison ring was used either to slip poison into an enemy’s food or drink, or to facilitate the suicide of the wearer in order to preclude capture or torture. The style of the poison ring, with a container under the bezel to hold the poison, led to rings that held other things, like locks of hair, devotional relics, other types of keepsakes, and … vinaigrettes.

This article is featured in: Regency Collections ~ Within Collections: Jewelry