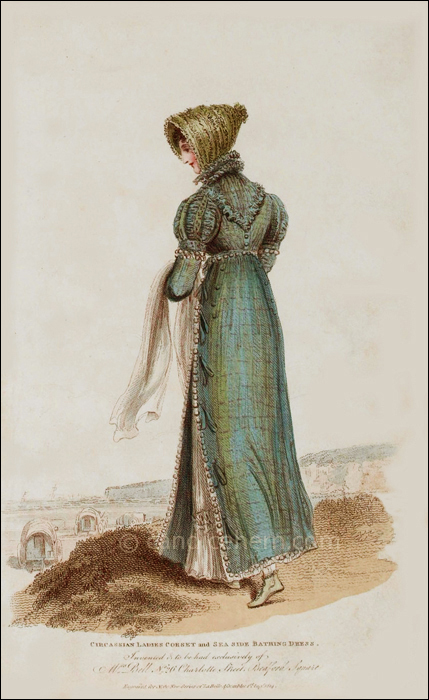 This ensemble, designed by Mrs. Bell, is described in such florid language that I have always assumed Mrs. Bell wrote it herself. She was related to the publisher in some way, most likely his daughter-in-law, so no doubt she had some input into the fashion pages.

The print, and especially the unseen corset, is described in the magazine as follows:

“High dress of rich Indian or Parisian chintz, made in a form peculiarly novel and elegant; it is trimmed with chintz bordering to correspond, or a rich silk trimming. Long sleeve, with the fullness let in at the top. The collar is extremely novel and beautiful, and the trimming most tastefully disposed, so as to give the appearance of a shirt to the pelisse: it is loose in the body, but fastens in to the waist. We forbear a particular description of this elegant and convenient dress, as it must be seen to be properly understood; we have only to observe that it is made in a form never before introduced, that it is equally tasteful and becoming; it enables a lady to dress herself in a few minutes without assistance, prevents the chance of taking cold by the long delay in dressing; and, when dressed, to look as completely fashionable as if she had employed the longest time at her toilet. The principal novelty, however, consists in Mrs. Bell’s new invented Circassian corset, which unites the advantages of being conducive to health and comfort, by being made of novel materials, free from superfluities, such as steel, whalebone, or any hard substance: so that ease, gracefulness, and dignity are given to the female form in a manner perfectly novel and original. It gives relief and protection to pregnant ladies, and at the same time adds dignity and beauty to the appearance. Head-dress Chapeau Bras. Slippers of pale green; and gloves to correspond.”

This article is featured in: Regency Collections ~ Within Collections: Fashion Prints, Sea Side Fashions