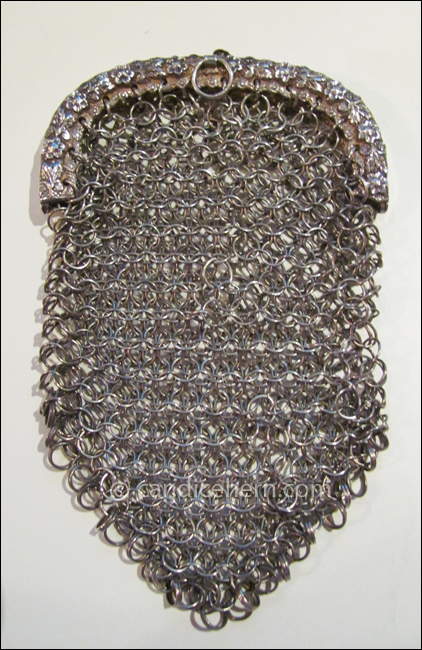 Sterling. Frame made by Lea & Clarke of Birmingham. Date mark is not entirely clear, but looks like it might be 1815.

This tiny coin purse (4 inches long) is made of hand-linked silver rings attached to a sterling silver frame. The frame has a floral design, a press-type clasp (which would help to date this as an early piece, even if it were not hallmarked), and a central ring, likely used to attach the purse to a chatelaine. It is exactly the same size and style as the knitted and beaded coin purses of the same period shown on this site. This style of coin purse was often called a sovereign purse after 1817, when the gold guinea was replaced by the gold sovereign coin. You can also see two almost identical silver link purses, dated 1816-1817, at the Victoria and Albert Museum.

This type of silver link purse became much more popular in later decades, and by about 1900, very fine silver and gold mesh bags were extremely fashionable. It is somewhat rare to see a silver link purse this early in the century.