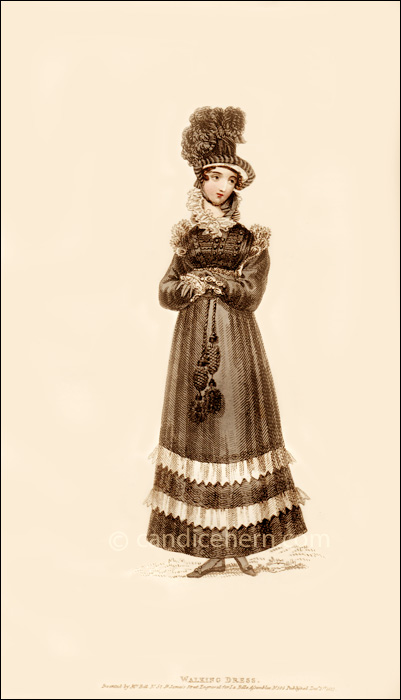 The first stage of mourning, in terms of dress, was known as deep mourning or full mourning, which prescribed black fabric with no sheen or shine, black trimmings, and black accessories. Half-mourning allowed greys, some lilac or light purple, and bolder use of white. But there was a stage of mourning in between full and half morning, variously called ordinary mourning, second mourning, or slight mourning.  The latter term is most often used in the ladies’ magazines. Slight mourning still required black fabrics, but there was some leeway given to fabrics with a hint more shine or sheen, and more bits of white were allowed in the trimmings.

This print represents slight mourning for Princess Charlotte who had died on November 6 after giving birth to a still-born son.

“Round dress of Norwich crape, with two flounces of white muslin broad hemmed or vandyked Spenser of reps silk, trimmed with crape, and surmounted by a triple ruff of white muslin. Bonnet of reps silk, lined with white, and elegantly finished at the crown with crape and black cypress feathers. Black chamois slippers and gloves.”