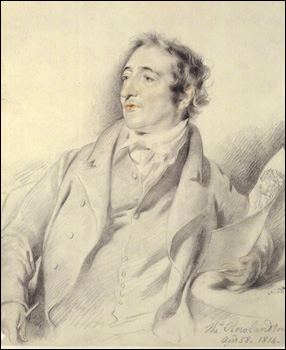 Another visual documentarian of the age, Rowlandson made his mark as a caricaturist. He was a student at the Royal Academy and in Paris, but never achieved the promise he displayed as a painter, primarily because compulsive gambling took priority over study. He eventually turned to caricature to finance his debts. He worked almost exclusively for Rudolph Ackermann, for whom he produced several series of Dr. Syntax prints (which he designed and engraved himself) as well as engravings for the Microcosm of London, Dance of Life, Dance of Death, and several other books. His caricatures lampooning prominent people and events were extremely popular and his hand-colored engravings and watercolors were to be found in most print-shops during the Regency.