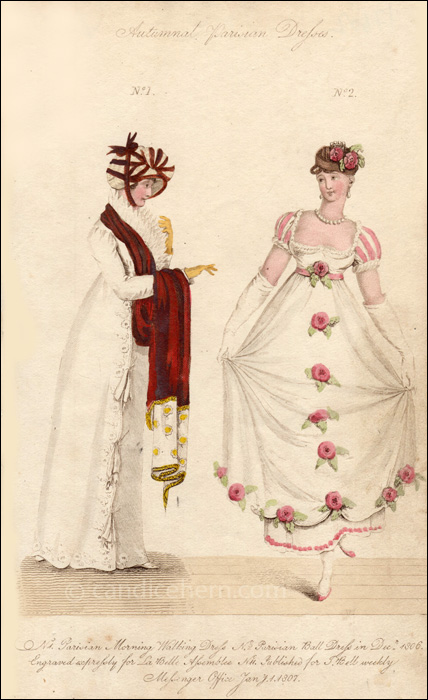 As is typical with Ball Dresses, the hemline is much higher than other dresses of this time, presumably for ease of dancing. I doubt, however, that actual dancing dresses were ever quite as short as they are portrayed in fashion plates.

Both dresses are inspired by prints from the French publication Journal des Dames et des Modes, but are not exact copies, as they often are.

“No. 1.–MORNING WALKING DRESS. Of twill sarsnet, cambric, or velvet, embroidered round the bottom and up the right side, where it confines the front which wraps under it, with three  bow and ends of correspondent ribband; long waist, with robin fron; and long sleeve, nearly to fit the arm. An erect Vandyke ruff, sloped to a point at the extremity of the waist, terminating with a steel clasp, which secures the belt. An Indian Scarf, or long shawl of crimson, with diversified ends, and border, thrown loosely over the shoulders, and negligently supported by the right hand. A poke bonnet, or woven willow, or fancy straw, blended with crimson velvet; bows of the same in front, edged with velvet; a band of the same passed under the chin, terminating in a bow and ends on the crown. Hair cropt behind, and formed in close curls in front. York tan gloves, and kid shoes.

“No. 2.–A PARISIAN BALL DRESS. A frock of white Italian crape, over a white satin slip; the latter edged with a narrow border of pink velvet at the feet; the frock festooned  in gentle curves round the bottom, with single Persian roses; ornamented up the front with the same, placed at regular distances, finishing in front of the waist, and apparently confining a pink velvet girdle. The body of the dress quite plain, lacing behind with a pink chord; and cut so low at the bottom as greatly to expose the bust. A narrow tucker of net, with full corkscrew edge. A full Melon-sleeve formed of alternate stripes of white satin and pink velvet; finished at the bosom with a trimming of corkscrew corresponding with the tucker. The hair divided behind; part formed in braids, and brought in loose loops over the right eye, the rest folded round the head in a plain band, so as entirely to disclose the ears, and fastened at the back with a cornet comb of pearl; two roses similar to those which ornament the dress, are placed on the left side. Pearl necklace, earrings, and bracelets; pink satin shoes, with silver trimming. White kid gloves.”