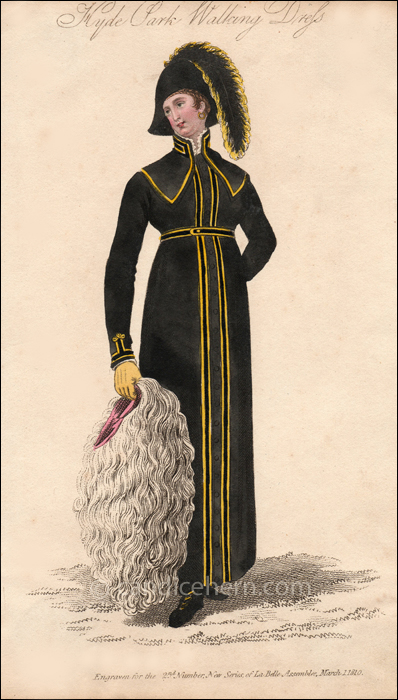 This pelisse has a very masculine, almost military look. Black is not used here for mourning. It was simply a very striking pelisse in black, set off beautifully with the gold braiding. It’s a simple, well-tailored coat that must have drawn many an admiring glance while strolling through Hyde Park.

Note the huge muff, a popular accessory throughout the Regency period. This one is made of angola, which I assume is monkey fur.

“A pelisse of black merino cloth or velvet, buttoned from the throat to the feet, made to fit tight to the shape with a band of crape, ornamented with a double row of gold braiding, or an oriental embossed silk trimming, worn over a chemisette of French lawn. A Spanish hat and flat drooping ostrich feather tipped with orange. Half boots of black or orange coloured Morocco; Angola muff lined with yellow [painted pink in this print]; the hair lightly curled on the left side with a thick braid crossing the face. Ear-rings of gold or amber. Gloves of York tan.”