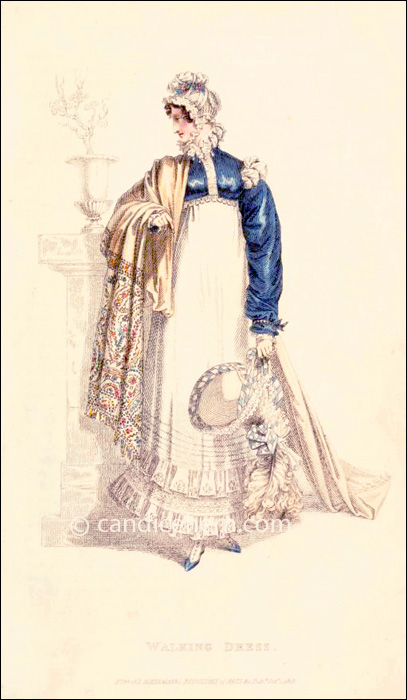 As fashion became fussier with more fancy trimmings and ornamentation, the descriptions in the magazines became longer, simply to describe the new complexity. Here, we even get a very detailed description of the bodice, which we can’t see as a spencer is worn over it. It is also interesting that the giant bonnet is removed to show the fancy cap worn underneath it.

Love the half-boots, even if they are worn on impossibly tiny feet.

“A round dress of jaconet muslin: the body is made high, without a collar; the back is plain; the front is formed of alternate strips of rich work and welted muslin; the welts are very small, and there are three in number between every strip of work. A frill of rich work stands up round the throat, and goes down the fronts. Plain long sleeve, rather loose except at the wrist, where the fulness is drawn in welts. The bottom of the skirt is finished by a flounce of work disposed in large plaits; this is surmounts by a row of embroidery and a second flounce of work, over which are three or four welts. The spencer worn with this dress is composed of dark blue gros de Naples; it is made tight to the shape, without seam, and richly ornamented with white satin. The collar, which stands up round the throat, is composed of white satin: it is very full, but the fulness is confined by narrow bands of gros de Naples; there are four or five, and a small white tassel, which depends from each, falls into the neck. The waist is finished by very small tabs edged with white satin. Lonf loose sleeve, ornamented with ribbon at the wrist, and with a puffing of white satin on the shoulder. Head-dress, a cornette of white lace, ornamented by bias bands of white satin. The top of the crown is full and rather high; the fulness is confined by a wreath of moss-roses,  which go round the top of the head. Bonnet of a French shape, composed of white satin, the edge of the brim finished by rouleaus of blue and white plaid silk; a large bow if the same material, and a plume of ostrich feathers, are placed on one side of the crown. White gloves, and half-boots, the lower part blue leather, the upper jane. A lemon-coloured shawl, very richly embroidered, is thrown loosely over the shoulders.

“We are indebted to Miss Macdonald for both these dresses.” Including this one.