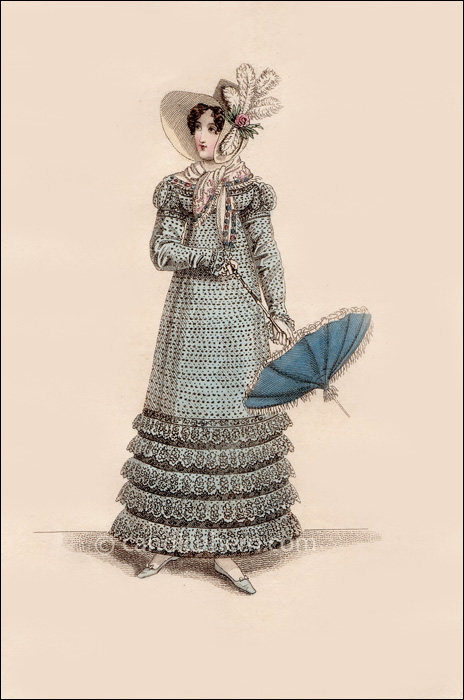 Not to put too fine a point on it, but the likely reason this print is labeled “Parisian Walking Dress” is because the print was copied from the French publication Journal de Dames et des Modes. Copyright laws were loose enough in England, but apparently non-existent when British publishers dealt with French publications. Almost every British ladies’ magazine that produced fashion prints “borrowed” prints from the popular French magazine since its inception in 1797.

The British versions of prints from Journal de Dames et des Modes often made few modifications. In this case, the only change made is to the face, giving it a slightly more realistic appearance.

The overall design shows typical trends seen in 1818, including multiple flounces, reaching almost up to the knee, fuller sleeves, and an extremely broad brim on the bonnet.

The La Belle Assemblée print is described in the magazine as follows: 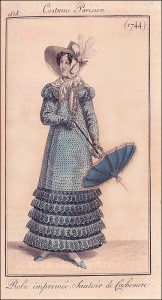 “Round dress of printed muslin, of a cerulean blue spotted with black, with bordered flounces of the same material to correspond; between each flounce a layer placed of black brocaded satin ribband.–Bonnet of straw-coloured gossamer satin, ornamented on the left side with a single full-blown rose, and a plume of white feathers. Cachemire sautoir [ie cashmere scarf], and a parasol of barbel blue, fringed with white. Slippers of pale blue kid, and washing leather gloves.”

At right is the original print from Journal des Dames et des Modes, July 10, 1818. Click on the print to see a larger version. You can see that the design is almost completely the same as the later British version. La Belle Assemblée even lifted part of the French description in its own description of the print.