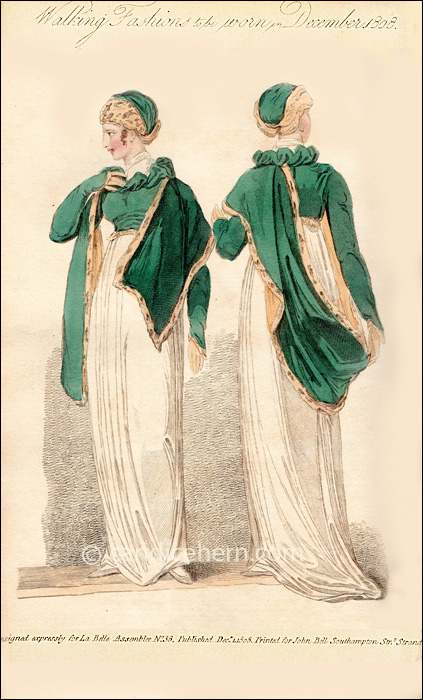 “Walking Fashion to be Worn in December 1808”

The fashion prints in La Belle Assemblée are always dated for the upcoming month. After all, if you know what will be fashionable NEXT month, you have time to dash to your dressmaker and be spot on trend. This print appeared in the November 1808 issue.

Note: On this site all La Belle Assemblée prints are dated based on the provenance at the bottom of the print. For example, this print is dated December 1808 at the bottom, even though it was published in the November 1808 issue. To avoid confusion, I will always use the date on the print.

Often in these early La Belle Assemblée prints a dress will be shown from both back and front, as here, which I think must have been very helpful to dressmakers. Also helpful is the description of how the dress might be altered to make it a more appropriate for full dress. You see less of these useful tips as specific modistes, especially Mrs. Bell, began to dominate the fashion pages with their unique designs. They would certainly want you to buy a walking dress AND a full dress rather than modifying one to serve both purposes.

The print is described in the text as follows:

“An antique frock formed of white or coloured crape muslin; embroidered (for full dress) round the bottom, bosom and sleeves, in a border of silver ivy leaf and berry; and worn over a white satin slip. For less splendid occasions, it is ornamented with lace, let in at its several terminations. It is made high in the neck for the last mentioned style, with a full rucked collar; but in the former is so constructed as partially to display the back and shoulders. The Highland spenser is formed of double-twill sarsnet, lined throughout with bright amber; the colour, Spanish Fly. It is cut low round the throat, and finished with an irregular frill or collar. The waist of the spenser is plain in front, and rather extreme in length. The scarf is gathered into a silver dash on one shoulder, flowing partially over the back, and one end crossing the figure in front. The whole is trimmed with spotted ermine, or a rich silk trimming of Chinese floss. The traveller’s cap, formed of the same material as the spenser, turned up with spotted ermine, or full puckered sarsnet the same as the lining of the scarf. Gloves of York tan, and shoes of dark green velvet with amber-coloured bows.”