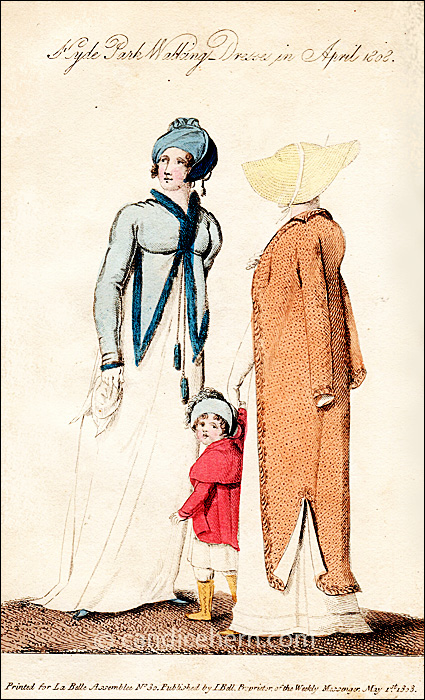 Children appear now and then in prints of this period, but seldom is their attire described, as it is here. It’s often difficult to determine a toddler’s gender at this time based on clothing, as very young boys and girls dressed similarly. The description of this child’s outfit, however, sounds like it is for a little boy.

“No. 1.–A WALKING DRESS. A plain muslin walking dress, with Spanish spencer of celestial blue, or shaded lilac sarsnet, ornamented entirely round with the new Chinese trimming, and confined round the waist with a large cord, and tassels to correspond. A bonnet composed of the same materials as the spencer, with tiara front, and Chinese trimming. Shoes of pale blue, or lilac kid. Gloves of York tan.

“No. 2.–A LADY AND CHILD. A high gown of French cambric, with long sleeves, shirt front, and frill of scolloped lace. A French hanging sleeve; coat with slashed skirt, and Spanish lappells, formed of figured Imperial sarsnet or Chinese silk–its color spring green, buff, or jonquille, ornamented with a floss of silk trimming of agreeably contrasting shades. A Gipsy hat of straw, or figured Imperial chip, worn rather forward; a little French cap appearing beneath, and the hair formed in close curls, or a waved crop behind. The hat tied simply across the crown with a narrow white ribband. A nankeen slipper, or show of pale green kid. Gloves of pale Limerick.

“CHILD’S ATTIRE–A frock, and short trousers of cambric, with Turkish pomposas of jonquille kid. A wrapping coat with deep cape, formed of fine scarlet or purple kerseymere. A beaver hat and feather of pale brown or dove colour.”