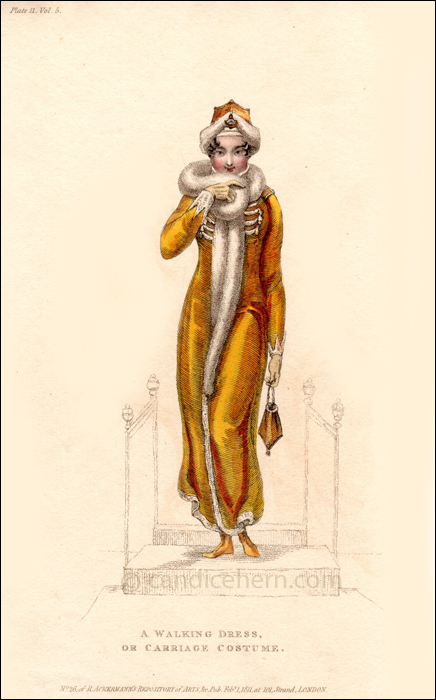 “A Walking Dress or Carriage Costume.”

This very striking garment reminds me of Edwardian styles 100 years later. Many elements of Regency style are seen in Edwardian fashions.

Note the purse is called a “ridicule” in the description. That French term was ultimately bastardized in the 1830s to the more familiar term: “reticule.”

“A military coat or pelisse of amber-coloured velvet, or Merino [wool] cloth, with Spanish cuffs, and high fluted collar, trimmed entirely round with Astracan fur. A round tippet of the same, and ridicule composed of the same material as the coat. An Algerian helmet cap of the same, blended with Astracan fur, ornamented in front with an amber crescent and chain of silver. Gloves a pale tan colour, and half-boots of amber-coloured kid.” 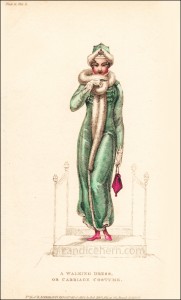 All fashion prints of this time were hand-colored. The black-and-white engravings were delivered to colorists for finishing before being sent to the binder. I have multiple copies of many prints, both British and French, and the copies are typically identical, with minor variations due to the hand-coloring. But I have never found a copy colored so differently as this one. (Click on the image to see a larger version.) The magazine text clearly describes the pelisse as amber-colored, with matching shoes and purse. Yet this colorist has made the pelisse green, and the shoes and purse bright pink. Was she making a fashion statement? Was she not given, or could not read, the instructions and made her own color choices? Or did an uncolored print somehow make its way into the hands of someone not at all associated with the magazine, who just used her imagination to color the print for her own amusement? We’ll never know.