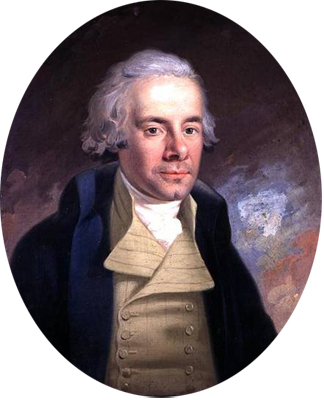 Politician and philanthropist, Wilberforce is best known for leading the British campaign against the slave trade. Following the lead of his politically-minded friend William Pitt the Younger, he was first elected to Parliament at 21 as an independent Tory. He led many campaigns over the years: for parliamentary reform on the one hand, against trade unions on the other. His faith led him to head the campaign to abolish the slave trade, and he introduced the first parliamentary bill to do so in 1791. It did not pass then, nor when he introduced similar bills in 1792 and 1793. Even while the government was preoccupied with events in France after the Reign of Terror in 1793 and was skittish of any social reform, Wilberforce kept introducing annual motions in favor of abolition. Finally, in 1805, an abolition bill was passed in the House of Commons, but it failed in the House of Lords. In 1807, with the help of Whig abolitionists, including Fox and Grenville, Wilberforce was able to get a bill passed through both houses that prohibited British subjects from aiding or participating in the slave trade, ie no British ships could carry slaves from that point forward. Wilberforce retired from Parliament due to ill health in 1821. He died in 1833, one month before Parliament passed the Slavery Abolition Act, which freed all slaves in the British Empire.