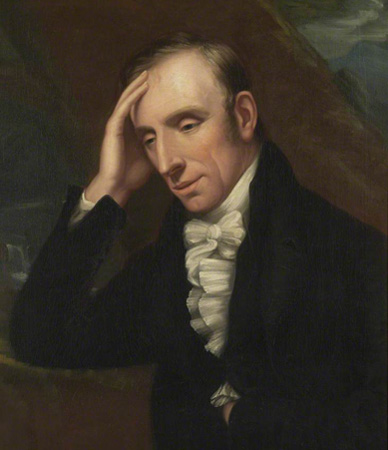 William Wordsworth helped launch the Romantic movement in poetry with the publication, with Samuel Coleridge, of Lyrical Ballads in 1798. A second edition, with additional poems, was published in 1800, and another expanded edition in 1802. Lyrical Ballads is considered a landmark work that changed the course of English literature. It was meant to overturn the old hidebound style of 18th century English poetry by writing in ordinary, everyday language accessible to the average reader.

Wordsworth’s masterpiece, though, the product of a lifetime, is generally considered to be The Prelude, an autobiographical conversational poem that he began in 1798 and worked on for the rest of his life.  It was not published until after his death in 1850.

Wordsworth theorized that poetry resulted from the “spontaneous overflow” of emotions, that the poet must surrender to emotion, so that tranquility dissolved, and the emotion remained in the poem. This explicit emphasis on feeling, simplicity of language, and the pleasure of beauty over rhetoric, ornament, and formality changed the course of English poetry, replacing the elaborate classical forms of the 17th and 18th centuries with a new Romantic sensibility. Wordsworth’s most important legacy is his launching of the Romantic era, opening the gates for later writers such as Keats, Shelley, and Byron in England, and Emerson and Thoreau in America.

Wordsworth was Britain’s Poet Laureate from 1843 until his death in 1850.