Just One of Those Flings

Lord Thayne, the hero of Just One of Those Flings, has recently returned from almost eight years in India. Though he has wanderlust in his blood, I wanted him to be more than a mere adventurer. I had read a great deal about the history of India, and I knew that a lot of serious and strategic diplomacy had taken place between the British and the various rulers of India, Persia, and Afghanistan during the early years of the 19th century, when there was a very real concern that Napoleon might gain a foothold in the region through Russia. At the time, the British presence in India was still controlled by the East India Company, which even had its own army. The British government had legitimate concerns that the Company might have a different agenda in its negotiations with the key rulers — after all, it was still a business enterprise even though it acted in every way like a territorial government — and I decided Lord Thayne was sent to keep an eye on the Company’s negotiations.

It is unlikely he would have been as intrepid a diplomat as I made him by sending him to the Punjab, Sind, and the Afghan, as well as Java, but he is a hero so I figured he could have done so. The Governor General of India at the time, Lord Minto, did indeed secure treaties with Ranjit Singh, the ruler of Punjab, Amir Shah Shuja of the Afghan, the Amirs of Sind and of Persia, effectively halting any potential French encroachment into the region. 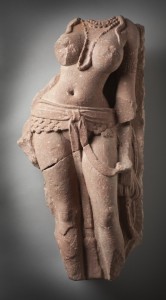 I also decided that while Thayne was in India, he developed a passion for Indian sculpture and brought home a large collection. This allowed me to indulge my own passion for Indian sculpture, developed during my college years when I made a serious study of it. I even went so far as to give Thayne’s collection my own favorite piece of sculpture, which he proudly shows to Beatrice in one of my favorite scenes. Shown here, it is a red sandstone figure of a woman, about 3 feet high, that was once a railing pillar. It is from Mathura circa 2nd century, and belongs to the Los Angeles County Museum of Art. Many years ago, as an art history graduate student, I had the pleasure of touring the storerooms where the enormous LACMA collection of Indian sculpture was then housed. (Their Indian art collection is so huge there is no way to display it all in the galleries, so the pieces are rotated.) The storerooms were packed to the ceiling with works of art, many simply lying about on the floor or stacked against a wall. I remember stepping carefully over a beautiful Gupta head of Buddha, and then seeing this elegant lady leaning against a wall. I was transfixed by the tactile quality of the carving. It really looked as though the skin of her belly would give when touched, so I broke the rules of the tour and surreptitiously touched her. I gave Beatrice the same reaction to the piece. And I also gave Thayne an appreciation for this type of voluptuous figure, which is one of the things that attracts him to the very curvaceous Beatrice!

« Read an Excerpt from Just One of Those Flings