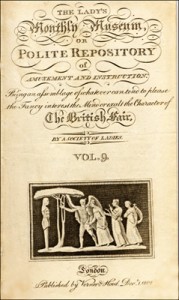 No, it is completely fictional. There was a real magazine called the Ladie’s Cabinet and another called the Lady’s Cabinet of Fashion, and I used a variation of those so that when Anthony won the magazine in a wager, he would think it was a piece of furniture!

I was inspired by the Regency period magazines in my private collection, especially the Lady’s Monthly Museum. That little magazine was a very conservative reaction to the Reign of Terror in France, during a time when the British government was terrified of a similar uprising in England. Its unspoken purpose was to keep women in their place, ie firmly in the domestic world of home and family. I created the fictional Ladies’ Fashionable Cabinet as a sort of rebuttal to the conservative ideology of the Lady’s Monthly Museum. The editors were liberal thinkers who had at one time believed in the French Revolution, but who now sought only to counteract the repressive content of their rival publication.