The English Regency, in its most literal interpretation, encompasses the years 1811 to 1820. It was the time during which the Prince of Wales (who later ruled as George IV) served as Regent while his father George III was so mentally unbalanced as to be unable to serve as monarch. In its broader interpretation — when used to describe periods of art, literature, fashion, design, and architecture — the Regency can encompass years as early as 1790 and as late as 1830. 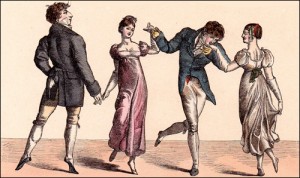 The Regency as a setting for romance is appealing in great part due to the rich dichotomy of society vs. history, the real world vs. the oblivious aristocratic fantasy world. It is that small, glittering, elegant world seemingly insulated from the horrors of the Napoleonic Wars, the beginnings of political, social, and agricultural reform, and the onset of the industrial revolution that provides a very real and complex backdrop for Candice’s novels. While the war ravaged the Continent and affected most English families through the loss of sons, husbands, fathers, brothers, and uncles, and while the Luddites rioted against industrialization, Society persevered in its elegant finery at balls and routs and parties of all kinds.

You are invited to ENTER THE REGENCY WORLD through the menu on this page, where you will learn more about the people, the places, the fashion, the language, and more. Not sure where to start? Try this page.