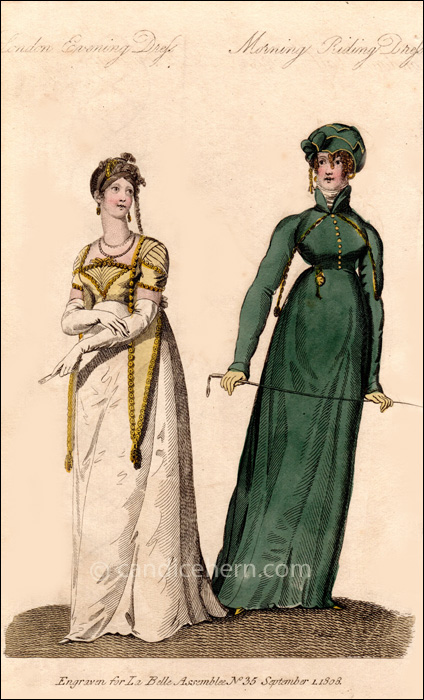 During the early years of this publication, most of the fashion prints showed multiple figures, and often in different types of dress, as here. This was also a period during which all sorts of fanciful international names were given to garments, accessories, and fabrics. In this print alone there are items Chinese, Roman, French, Spanish and Polish. As for the “Patriotic hat” — I have no idea what that refers to, and I can’t say I’ve seen another quite like it!

“No. 1 – London Evening Dress. A round dress of white Imperial sarsnet, or Italian crape, with a Roman tunick of amber satin, or Chinese silk. Antique stomacher, shirt folded sleeve, and rosette trimmings. Hair disposed in alternate bands and curls, with a long corkscrew ringlet falling from the left temple on the shoulder. Crescent comb, or ornament of fine wrought gold, placed in front of the hair. Necklace, earrings, and bracelet of amethyst, set transparent. French kid gloves above the elbow. Shoes of white satin; and India fan of carved ivory.

“No. 2 – A Riding Dress. A Spanish habit, or Polish riding dress, with the Patriotic helmet; formed of superfine Georgian cloth, or thin kerseymere. Gold buttons, and trimming to correspond. Small French watch, worn on the outside. Plain high cravat of French cambric; collar of the habit sitting close round the throat. Hair in in irregular ringlets. Gloves and shoes of lemon coloured kid.”