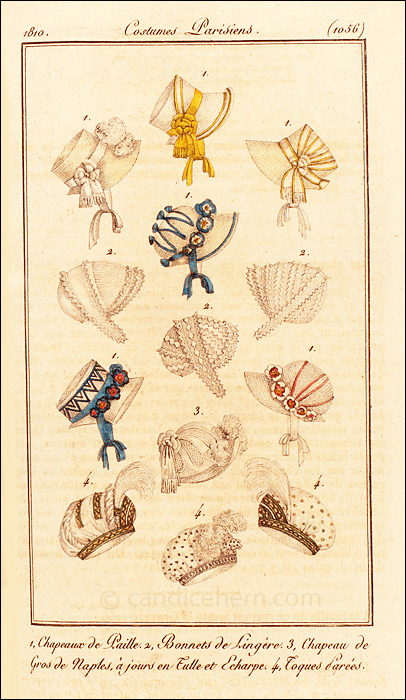 By 1810, we start to see brims grow broader on bonnets. They will continue to do so for several years, but at this time, the brims are still rather moderate. Nothing like the “tunnel” brims of 1807. Brims shrunk to a very small size after that weird 1807 anomaly, but by 1810 they are coming back.

The crown also starts to rise in this year, no longer staying close to the head. We start to see more straight-sided crowns as well, as in the three hats in the top row here.

“2. Bonnets de Lingère.” These are caps worn to bed, or at least in the intimacy of the bedroom.

“3. Chapeau de Gros de Naples, à jours en Tulle et Echarpe.” Gros de Naples is a thick silk fabric. Here, it is inset with tulle and tied at the crown with a scarf.

“4. Toque Parées.” A toque is a close-fitting turban-like hat without a brim. They are seen frequently in French prints from about 1805 and continue throughout the next two decades. They did not become popular in England until around 1817.