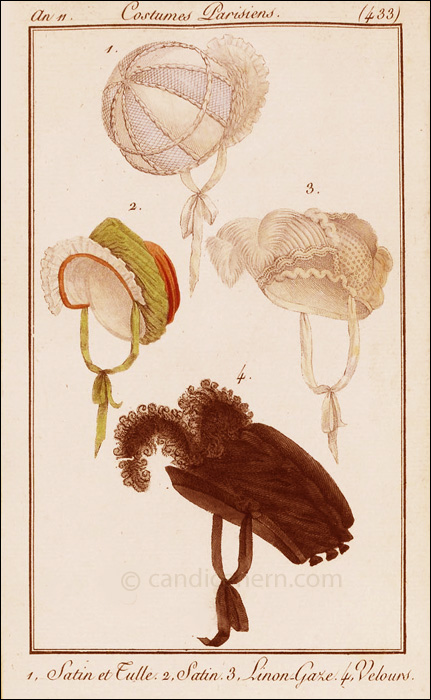 At this time, hats of all types were generally made to fit close to the head. Brims were quite small, if existent at all, secondary in design to the crown which held all the interest.

Each of the hats shown here are completely made of fabric, with little or no stiffening material such as straw.

Number 1 is a satin cap with a very round crown made of panels of alternating blue and white satin, with an abbreviated brim made of tulle. It would have been worn with day wear.

Number 2 is a hat made of red and green satin, with a brim trimmed in lace. It is possible that the brim is stiffened with straw, which would make it a capote, but it appears to be stiffened fabric. This hat would have been worn with day wear.

Number 3 is a turban style cap, made of lawn gauze, with no brim at all, and two ostrich plumes. It would most likely have been worn with evening dress.

Number 4 is a jockey hat, in black velvet with two black plumes. It would have been worn with a riding habit.

Though these are French hats, equivalent styles are seen in English prints of the same period.