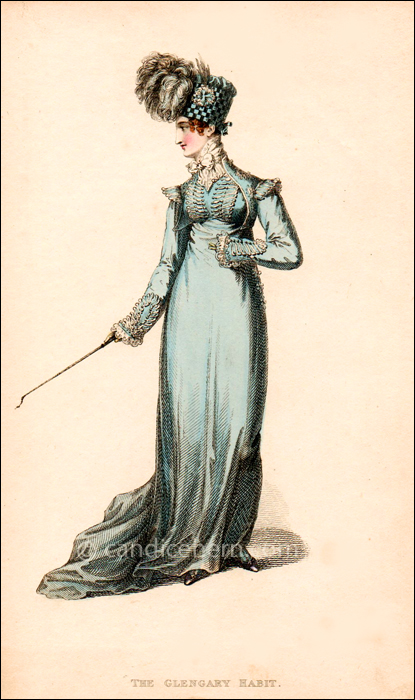 This spectacular habit must have been a show-stopper in its day.  Though its styling is military, its ornamentation gives it a more feminine look. Fashions of 1817 are much more elaborately ornamented than in previous years. And though a riding habit does not allow for the fussy flounces seen in ordinary day wear, the bodice and jacket here are very much in the heavily ornamented style of the day.

“It is composed of the finest pale blue cloth, and richly ornamented with frogs and braiding to correspond. The front, which is braided on each side, fastens under the body of the habit, which slopes down on each side in a very novel style, and in such a manner as to define the figure to considerable advantage. The epaulettes and jacket are braided to correspond with the front., as is also the bottom of the sleeve, which is braided nearly half-way up the arm. The habit shirt is composed of cambric, with a high standing collar, trimmed with lace. The cravat is of soft muslin, richly worked at the ends and tied in a full bow, and there are narrow lace ruffles at the wrists. The headdress takes the form of the Glengary cap, composed of blue satin, and trimmed with plaited ribbon of various shades of blue, and a superb plume of feathers. Blue kid gloves are worn and half-boots.”

Georgette Heyer often used prints from Ackermann and La Belle Assemblée as inspiration for her characters’ clothing. Fans of The Grand Sophy will recognize this print as the specific inspiration for the habit worn by Sophy in this scene:

When Miss Wraxton’s invitation was conveyed to Sophy she professed herself happy to accept it and at once desired Miss Jane Storridge to press out her riding dress. This garment, when she appeared in it on the following afternoon, filled Cecilia with envy but slightly staggered her brother, who could not feel that a habit made of pale blue cloth, with epaulettes and frogs, a la Hussar, and sleeves braided halfway up the arm, would win approval from Miss Wraxton. Blue kid gloves and half-boots, a high-standing collar trimmed with lace, a muslin cravat, narrow lace ruffles at the wrists, and a tall-crowned hat, like a shako, with a peak over the eyes, and a plume of curled ostrich feathers completed this dashing toilette. The tightly fitting habit set off Sophy’s magnificent figure to admiration; and from under the brim of her hat her brown locks curled quite charmingly; but Mr. Rivenhall, appealed to by his sister to subscribe to her conviction that Sophy looked beautiful, merely bowed, and said that he was no judge of such matters.