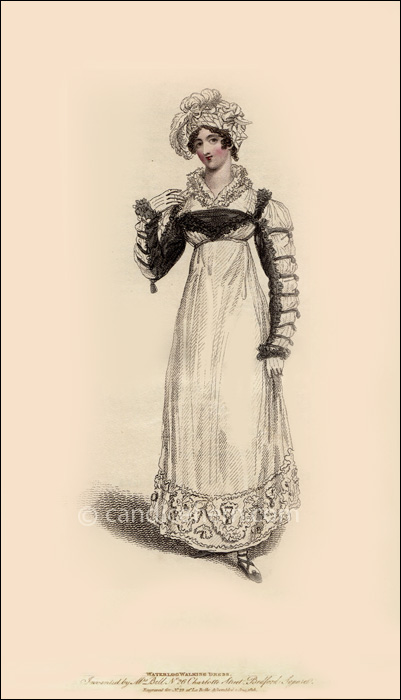 This print represents half-mourning for the lives lost at Waterloo. Here is what it says in the General Observations on Fashion and Dress from this issue:

“The glorious but dearly bought victory of Waterloo has rendered the court mourning so general … that we have nothing new to announce in colours. The first mourning is now out, but the second mourning [ie half-mourning] which is to continue for some time longer, affords more variety. … Black and white is the costume of fashion at present, it will shortly change to white and grey …”

“This very beautiful dress, which answers the double purpose of walking or dinner dress, is composed of clear muslin, and is made in a most original and tasteful style: the petticoat, as our readers will perceive by the Print, is ornamented in an elegant and appropriate manner with a tasteful black trimming. The body and sleeves, composed of an intermixture of black satin and clear muslin, are exquisitely fancies; they are made in a style of novelty, elegance, and simplicity which we never recollect seeing equalled in the mourning costume. The Waterloo dress, when worn for dinner parties, has no shirt, but some ladies shade the neck a little by a narrow frill of white crape round the bosom. In the walking costume it is worn with a shirt invented for the occasion, and trimmed in a very novel and appropriate style. Of the hat worn with this dress we can only observe that it is the most elegant and striking head dress ever invented for mourning; it is an intermixture of white satin and black crape, most tastefully ornamented with either black or white feathers, Black or white kid sandals, and white kid gloves finish this dress, the effect of which altogether is much more elegant than our fair readers can conceive from the Print, or from our description.

“The above dresses [including the other print from this month] were invented by Mrs. Bell, Inventress of the Ladies Chapeau Bras and the Circassian Corsets, and of whom only they can be had, at her Magazin des Modes, No. 26, Charlotte-street, Bedford-square.”

This article is featured in: Regency Collections ~ Within Collections: Walking Dresses, Mourning Attire