Fashions of London and Paris, October 1805. 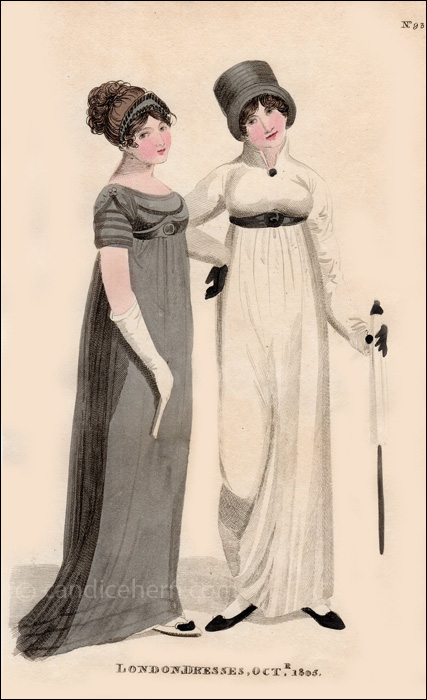 Whereas full morning required unrelieved black, half-mouning allowed grays and whites and lavenders. A normal white dress, such as the one on the right, could have easily been accessorized with black for half-mourning.

Some have interpreted mourning and half-mourning prints of this period to have been for Lord Nelson, who died at the Battle of Trafalgar on October 21. But  Nelson was a commoner, despite his titles, and public mourning would not have been proclaimed for him by the Lord Chamberlain.

“Fig. 1.–A dress of black crape over white sarsnet, the dress made very long, and trimmed and ornamented with black velvet and bugles; a tucker of the same, drawn over the bosom. The hair dressed in the most fashionable manner, and ornamented with a tiara of black bugles. White gloves, shoes, and fan.

“Fig. 2.–A walking dress of cambric muslin, made high on he neck with a collar, and long sleeves; the waist confined with a black velvet band and clasp. A turban hat of black chip. Black gloves and shoes.”