Fashions of London and Paris, January 1805. 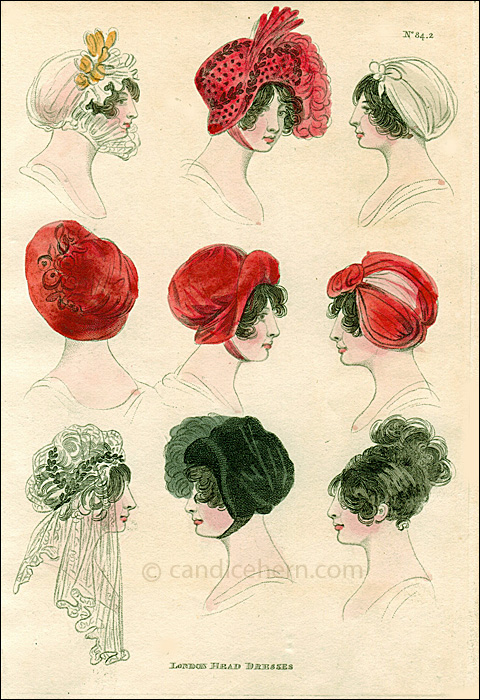 Most of the hats in this print are made of velvet, which would have been appropriate for winter. One has to wonder if the predominance of red was simply to make it easier for the colorists. The upper left figure with the chin frill is unusual, though I have seen silhouettes with similar frills. Can you imagine eating with that crumb-catcher? One hopes it was detachable. It’s also interesting that the bottom right figure showing a hairdo and not a hat is described as “a head-dress of hair.”

“No. 2.–A hat of amaranth velvet, covered with blond lace, and trimmed with black velvet. A feather to match the hat.

“No. 3.–A handkerchief cap of white crape, finished with a bow on the left side.

“No. 4. and 5.–Peruvian hats of coloured velvet, ornamented with velvet wreaths.

“No. 6.–A turban of ruby-coloured crape.

“No. 7.–A veil of white lace, formed into a cap, with wreaths of black velvet.

“No. 8.–A hat of black velvet, ornamented with a black feather.