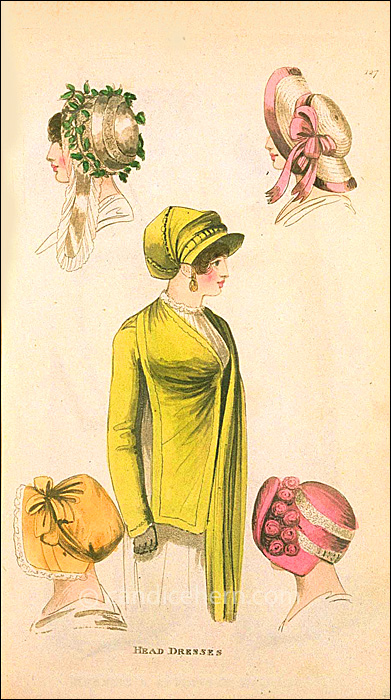 Fashions of London and Paris, July 1808.

The prints featuring hats in this magazine were often described as “Half Lengths” in the description titles, with the central figure showing more than just the hat.

This is an interesting print in that it shows several different styles of headdress.  The example on the upper left is called a cap as it is entirely made of fabric, ie no straw or other stiff material. The hat on the central figure is called a helmet bonnet, which, at this time, referred to a domed bonnet with a short, close-to-the-head brim. Later, during the next decade, helmet style hats typically had no brim at all and were more vertical.

The gypsy hat shown on the upper right is a style that began back in the mid-18th century: a very wide brim and shallow crown, with ribbons passing from the crown, over the brim, and tied under the chin.

The hats shown on the two lower figures are capotes, ie the crown is composed of a soft fabric, while the brim is of straw of other stiff material.

“Fig. 1.–A cap of white satin and lace, finished with a long end over the left side, trimmed all round with lace, and ornamented with a wreath.

“Fig. 3.–A round dress of white muslin, made high over the bosom, and trimmed with with lace. A spencer of yellow silk, with a drapery fastened to the shoulders to hang in front. Helet bonnet, the same colour as the spencer.

“Fig. 4.–A close bonnet of buff colour silk. trimmed round the front with white lace.

“Fig. 5.–A bonnet of pink silk and lace, turned up in front, and ornamented with a flower.”